Okada Ban: Female Bike Rider Who Spoke Against The Ban Rewarded With A Car (Video)


A female biker has received a car gift after speaking against the bank on okada by Lagos state government. 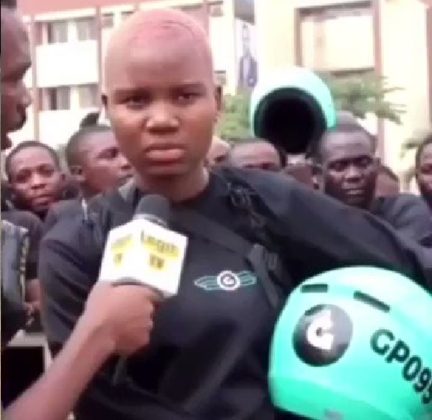 Sandra
The Kokun Foundation has gifted a Nigerian woman identified as Sandra a car.
This is coming after she went viral in an interview where she did to spoke against the ban of commercial motorcycles in Lagos.
Sandra, an OND graduate of Accountancy from College of Technology, is currently on her one-year Industrial Training with one of the bike-hailing company as a ‘rider’ and as such, was affect with the sudden #OkadaBan in Lagos State.
In the viral video, Sandra earnestly pleaded with the Government to regulate the bike services and NOT ban them because there were so many people who would become unemployed and experience a more difficult life due to the ban.
Sandra also said she was currently doing the job because she wants to save enough money to sponsor her quest for a Higher National Certificate when the time comes.
It seems her new benefactor, Kokun, came across the video on social media and decided to ease her pain by giving her a brand new car.
See video below:

It’s a beautiful amazing Tuesday! Guess what? I have seen Sandra who ride go lads who collected as Hire purchase but unfortunately she can’t drive it again due to government ban! But, God as prove himself, Today we Dash sandra a new Toyota Corolla 2004 for Uber to sustain her to feed herself, family and also use it to send her self to school in Yabatech! My People let’s not merely say that we love each other; let us show the truth by our actions! God bless Chinonso okoye! #Kokun Foundation