A woman left helpless after giving birth to three babies has cried out for help. 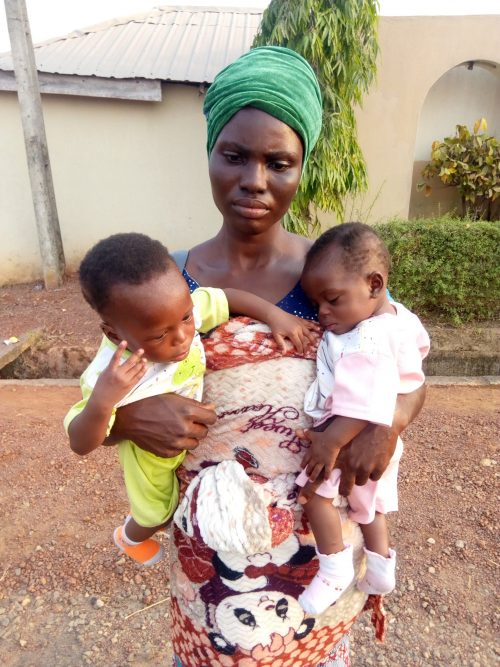 Mrs. Balikis Popoola
A woman that was abandoned by her husband after giving birth to triplets at a hospital for six months, has cried out for help.
Mrs Balikis Popoola, who gave birth to two boys and a girl said that her husband had since disappeared into thin air after learning that she gave birth to triplets.
She also disclosed that life had been extremely difficult since she gave birth to the unexpected bundles of joy as she had been with no stable source of income to take care of the babies.
Speaking at the Ogun State secretariat of Nigeria Union of Journalists (NUJ), Oke Ilewo, Abeokuta, the 25-year old petty trader said though she never regretted having the triplets after giving birth to her first child 11 years ago, but the fact that she had nothing to take care of the children usually made her sad, adding that she feared for the future of the babies.
”I had the babies through ceaserian operation at a private hospital at Olorunsogo, Abeokuta. Our medical bills was N300,000 and as soon as my husband, Mr Samson Popoola, a cassava flour miller at Lafenwa market heard about this, he pretended as if he was going to look for the money but since then he has been nowhere to be found while his phone has been switched off”, she narrated.
Balikis revealed that as part of effort to pay up this debt, she had been going about some churches in Abeokuta to beg for money.
She disclosed further that the Medical Director of the private hospital where she gave birth to the children on humanitarian ground wrote off the debt since she couldn’t pay up the balance, but that her major worry remained having a stable source of income to take care of the children.
Balikis said her petty trading business had collapsed under the heavy weight of the financial demand needed to take care of the kids, stressing that the triplets had survived till date on the benevolence of relatives and people around her.
She said “all I am asking from our government and all Nigerians is help such that I can have a steady source of income to take care of the triplet and their elder brother, Daniel whose Dad is late.
“I won’t also mind if I can get scholarships for them. I really want to do my best to ensure that they are educated and become great people in the future since I didn’t go to school”.
Balikis also revealed that she had paid several visits to Yinka Ayefele’s radio station in Abeokuta since the birth of the children trying to seek help, but that his workers did not allow her access to the musician, adding, “they keep telling me he is not around even when I see him going in to the radio station.”
Top Stories