Dwayne 'The Rock' Johnson's Daughter Simone Johnson, Follows In His Footsteps, Signs With WWE To Become A Wrestler


The Rock's daughter, Simone Johnson has followed in her father and grandfather's footsteps as she joins WWE. 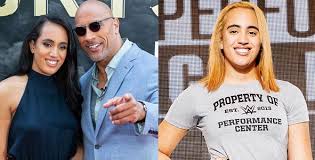 The Rock and daughter, Simone Johnson

Simone Johnson, the 18-year-old daughter of  Dwayne "The Rock" Johnson is planning to follow in the footsteps of her dad, grandfather, and great-grandfather into wrestling.

She responded to the news on Instagram shortly after WWE, writing, "To the little girl who fell in love with wrestling & said 'this will be my life one day', this is for you. I'm humbled, grateful & ready to work. Let's do this."


Simone Johnson also told WWE: “It means the world to me. To know that my family has such a personal connection to wrestling is really special to me and I feel grateful to have the opportunity, not only to wrestle but to carry on that legacy.”

“Simone knows she has a lot to learn,” WWE head trainer Matt Bloom said. “She’s hungry to learn and picks the coaches’ minds, and the veteran Superstars’, as well. She’s not going to rest on her laurels. It’s been a short time, but she’s been crushing it.”

Her father, Dwayne "The Rock" Johnson, is the first third-generation wrestler in WWE history.  He was an eight-time WWE heavyweight champion and one of the biggest stars in pro wrestling history.