The quick intervention by the Lagos State Fire Service prevented a serious fire disaster at the office of the Rapid Response Squad (RRS) of the Nigeria police. 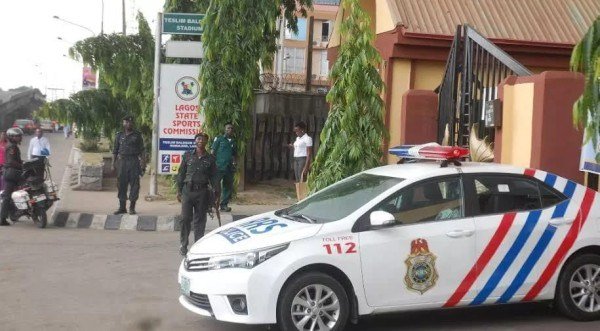 RSS office
The office of the Rapid Response Squad (RRS) of the Nigeria police at the Secretariat, Alausa, Ikeja was today gutted by fire.
However, the swift intervention of fire fighters from the Lagos State Fire Service, LSFS stopped the fire from escalating.
Eyewitnesses said heavy smoke billowed out from the building situated next to the Bagauda Kaltho Press Center, which is the office for correspondents covering the governor’s office.
It created pandemonium with officers running around in confusion as well as civil servants from the surrounding offices trying to find a solution to the outbreak.
But the situation was brought under control with the timely arrival of the Lagos State Fire Service, whose office is also at Alausa.
The fire outbreak is suspected to have been caused by power surge.
However, all officers on duty were safely evacuated from the building and no casualty was recorded.
It would be recalled that Lagos has recently been plagued by series of fire outbreak which resulted in the loss of lives and properties.
Top Stories