A helpless woman has lost her marriage after armed robbers invaded her house and took turns on her. 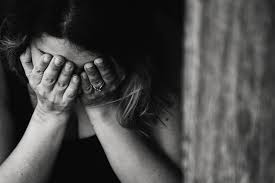 A crying woman (file photo)
A top politician in Lagos, Mr. Olalekan Bashorun, has sent his wife, Fatimo, away from their matrimonial home after four deadly armed robbers invaded their home, raped her in his presence, according to a report by PM Express.
The report further revealed that the act has crashed the 7-year old marriage.
The tragic incident happened at Isaba Street, Ikotun area of Lagos, when the robbers raided the street.
Since the incident happened two years ago, the marriage crashed as Olalekan stopped sleeping with his wife, Fatimo, subjected her to constant beating before he reportedly sent her away from their matrimonial home.
Following the frustration, the embattled Fatimo has filed a divorce suit before the Igando Customary Court seeking for the dissolution of the marriage which had produced two children.
The embittered Fatimo told the Presiding Judge, O.A Akande, to end her marriage to her husband, Olalekan Basorun, who is a popular hotelier and politician in the area for constant beating, harassment and neglect of their 2 children.
Fatimo approached the Court seeking the dissolution of the marriage and narrated the unfortunate incident which took place on Christmas day of 2018, which led to the breakup of the peaceful marriage with her husband.
She told the Court that on that day, armed Robbers stormed their house after robbing almost the whole street. According to the 37 year old lady, who is into textile material business, the gang took money, jewelries and other valuables. She said four of the fully armed men took turns to rape her right in the full glare of her husband, who was beaten black and blue.
However, the only saving grace was that their 2 children were holidaying with her mom at the time.
Fatimo told the Judge that her world came crashing when shortly after the incident, the husband changed completely.
“He stopped giving me money for the upkeep for my children, started staying out late and even stopped sleeping with me” she told the Court.
She said that her husband’s change of attitude stemmed from the rape she suffered in the hands of the robbers, which he witnessed 2 years ago and she was forced to move out of the house.
The husband, Olalekan, who was in Court, denied the charges. He told the Judge that it was his wife who stopped sleeping with him adding that the wife said the robbers accused him of dating the wife of a rival politician in the area, an accusation he vehemently denied.
Top Stories