See The Notorious Kidnapper 'Nayabale' Gunned Down In Katsina (Photo)


A kidnapper terrorizing residents of Katsina state has met his waterloo in the hands of police officers. 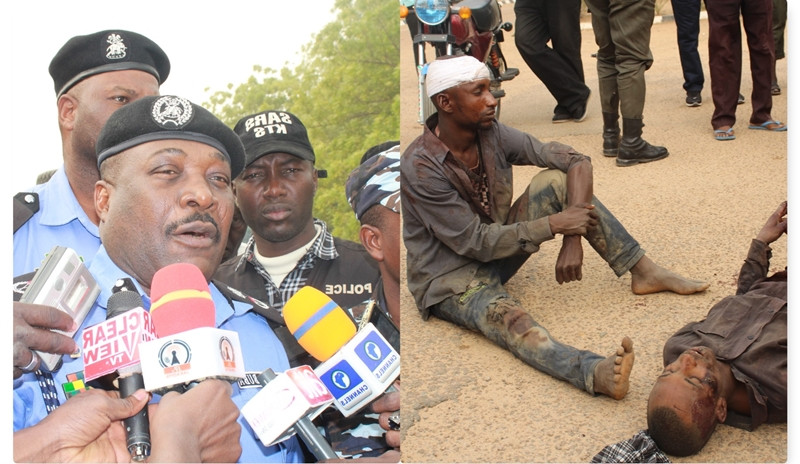 Abubakar Nayabale was shot dead by the police in Katsina state
A notorious kidnapper, Abubakar Nayabale has been killed by men of the Katsina police command.
The officers also rescued a victim in Kurfi Local Government Area of the state during the bloody encounter..
Spokesman of the command,  SP Gambo Isah, who confirmed the incident newsmen on Thursday in Katsina, said that another notorious bandit, Tanimu Salisu, was also arrested.
"On 17/02/2020 at about 15:00hrs, bandits numbering eight (8) on motorbikes, armed with AK 47 rifles, shooting sporadically, attacked Kumare village, Kurfi LGA of Katsina state and kidnapped one Yahaya Tella, m, aged 55yrs of the same address.
Operation Puff Adder led by the DPO Kurfi in collaboration with Vigilante group swiftly responded to the scene and engaged the hoodlums in a gun duel. The team succeeded and killed one Abubakar Nayabale, m, a notorious bandit, arrested another notorious bandit one Tanimu Salisu, m, of Zakka village, Safana LGA of Katsina state, rescued the victim and recovered two Boxer motorcycles.
One member of the Vigilante lost his life during the encounter. Investigation is ongoing." said the PPRO.
Top Stories