A gunrunner who is said to have supplied over seven AK47 rifles to criminals has made a startling confession on Abuja. 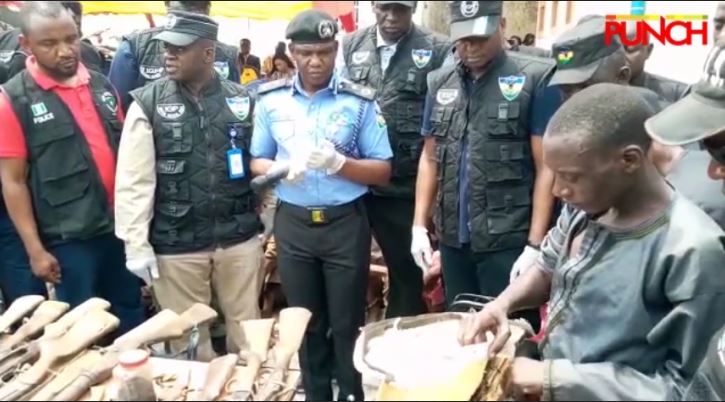 The suspect with the police

According to a report by The PUNCH, a suspected gunrunner, Adamu Numan, who sold firearms to criminal gangs disclosed that he had supplied over seven AK47 rifles to bandits, robbers and kidnappers.

Numa, who was paraded by the police in Abuja on Wednesday, said, “I buy each AK47 rifle for N450,000 and sell for between N650,000 and N700,000. I have sold over seven rifles and 200 ammunition to bandits. I buy them from Muhammadu Halilu in Niger Republic; this is the second time I was arrested.”

Speaking to Punch Metro, another suspected firearms dealer, Usman Mohammed said he supplied guns to gangs in Sokoto, Kano, Bauchi, and other cities.

The 30-year-old, who spoke in Hausa, explained that he got the weapons from one Haruna Balarabe.

“Balarabe gave me guns which I sold to buyers in Sokoto, Kano, Bauchi and other places. Balarabe is based in Niger Republic,” Mohammed said through an interpreter.

A suspected kidnapper, Haruna Dalatu, also narrated how he killed his nephew while abducting his own half-brother in Katari, Kaduna State.

He attributed the nephew’s death to ‘destiny,’ noting that the boy was destined to die on that fateful day.

Dalatu and his gang members were said to have held their victim hostage for some days until they were paid N1 million ransom.

Dalatu told journalists that he was given a share of N.2m from the ransom which he used in acquiring a plot of land.

He said, “We were attempting to abduct my half-brother when his son came out of his room, so we killed the boy and abducted his father. We kept him in a place for 10 days and released him after his family paid N1m. I used my share of the money which is N200,000 to buy a plot of land.”