Ronaldinho's friend has revealed the state of the former Ballon d'or winner while in prison confinement. 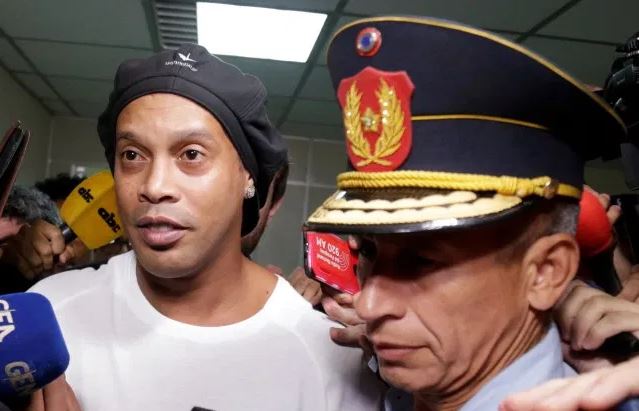 Ronaldinho is sad and angry, but smiling and eating well as he remains locked up in a Paraguayan prison over accusations of using a fake passport.

The Brazilian football legend has been detained since 5 March after he and his brother were found with fake documents in their hotel, which claimed they had Paraguayan nationality.

The former Barcelona player’s lawyer claims he was given the passports as a novelty present by local sponsors and accidentally presented them instead of his Brazilian documents.

The investigation is ongoing, but a request to be detained under house arrest has been denied, with judge Clara Ruiz declaring Ronaldinho and brother Roberto de Assis Moreira as a flight risk.

It is unknown how much longer the 39-year-old will remain in prison, but his friend, Fernando Lugo, reports it is not too bad for him in there.

While the World Cup winner is angry about the situation, he is sharing a cell with his brother and he is mingling with other inmates and eating well.

‘He is a little sad but always smiling. I think he is angry,’ said Fernando Lugo to Paraguayan newspaper Extra, via the Sun.

‘He told me, “how are they going to do this to me in your country? I am never coming back to Paraguay.”’

‘He is not in need of anything, he is well-attended. He eats asado every day, he likes it.

‘It is not like he is shut in his room all day, he speaks with the guys sitting outside.

‘What is happening to him is unfair. Why would he do those things? He is not in need.’

Paraguay’s Interior Minister, Euclides Acevedo, had claimed that the facility where Ronaldinho is being held ‘is not a prison’ and suggested the building was ‘almost a hotel’.

Ronaldinho had been allowed to enjoy himself on the football pitch, playing in a prison football match last Friday, and unsurprisingly making his fellow inmates look a bit silly.

Ronaldinho had reportedly struggled when he first arrived at the Paraguayan jail, but prison warden Blas Vera says his mood has improved, telling Reuters: ‘In broad terms he is doing very well.

‘I see he is in good spirits, just like you see him on television, always smiling.

‘Since yesterday he looks very well, he talks to his other inmates, he goes out to the patio.’