Nigeria's President Muhammadu Buhari has been tackled by a former chieftain of the All Progressives Congress over his speech yesterday. 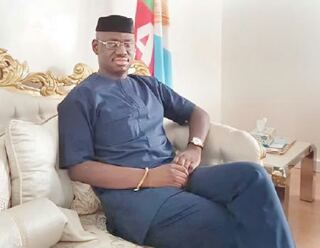 Timi Frank
Former Deputy National Publicity Secretary of the All Progressives Congress (APC), Comrade Timi Frank, on Monday, described President Muhammadu Buhari’s pre-recorded broadcast to the nation on Sunday evening as a monumental embarrassment to Nigerians.
Frank in a statement in Abuja, said that Nigerians were disappointed in Buhari’s speech because it fell shamefully short of a “presidential crisis broadcast” compared to what world leaders are offering to their citizens at this time.
He said that Nigerians would have forgiven the President if he had stuck to his decision not to speak to Nigerians on efforts being done to contain the spread of the Coronavirus (COVID-19) in the country, instead of being “wide in generalities and short on specifics.”
Frank said: “The broadcast was worse than COVID-19 because it failed to outline a specific roadmap on how Nigeria can win this invisible war.
“Any measure from the Federal Government that does not advance Nigeria’s response to the COVID-19 will ultimately hurt Nigerians.
“The President has not only lost precious response time, he is yet losing time while the rate of infection is steadily growing in the country.
“Nigerians were highly disappointed that instead of a live broadcast - with the media given the opportunity to seek clarifications for the benefit of Nigerians - the President opted for a pre-recorded and stilted message.
“He only played back to Nigerians what most experts have recommended and which many state governments have already started implementing.
“While Ghana with about 28 million population is attacking the pandemic with $100 million, Nigeria with over 200 million people is approaching the virus with a paltry N15 billion which translates to roughly $40 million going by the prevailing exchange rate. Are we being serious and responsive here?”
He commended the Governor of the Central Bank of Nigeria (CBN), Godwin Emefiele, for appealing to Chief Executives of commercial banks to support the Federal Government’s fight against the pandemic.
He however called on individuals and corporate bodies that have pledged financial assistance to contain the virus in the country not to handover such funds to the administration if they don’t want their hard earned resources looted.
“They should rather partner with individual state governments to ensure that the funds are prudently spent like the example that GTBank has done in partnership with the Lagos State Government by erecting a 100-bed hospital for the isolation and treatment of confirmed cases,” he said.
According to the Bayelsa-born political activist, “Buhari only told Nigerians what they already knew - things many state governments have already implemented. Yet, all palliatives promised by the President will be delivered in ‘coming weeks.’
“The President failed to tell Nigerians about the testing capacity of the Nigeria Centre for Disease Control (NCDC) that is leading the charge against this deadly virus in the country.
“How many people can the NCDC test per day and what medical exigences are needed to successful treat confirmed cases and ensure that they resume their normal lives?
“How many people are going to benefit from
the conditional cash transfer. How many IDPs will benefit from the two months food rations being planned by Buhari in ‘the coming weeks?’
“Nigerians are aware that the school feeding programme of the Federal Government has performed wonderfully in theory. How does the President want to feed children that are not in school?
“Buhari restricted movement in Lagos, Ogun and the FCT for two weeks, however, he failed to say when most civil servants especially in the FCT that have not been paid will receive their salaries.
“How are these categories of workers expected to cope with the lockdown without a Kobo in their pockets?
“All over the world, no government has restricted media coverage of the ongoing pandemic, but Buhari said those in Abuja and Lagos can only move if they can prove they cannot work from home!
“Do media houses operate newsrooms or broadcast stations from the homes of their respective employees?
“I think Nigerians deserve something better from their President in the the face of this global scourge.”
He saluted Nigerians for their resilience in this trying moment and prayed for quick recovery for those undergoing treatment as a result of the virus.
He also urged Nigerians to intensify prayers for the pandemic to cease in the country.
Signed
Comrade Timi Frank
Political Activist
Abuja.
Top Stories