A former minister of Aviation has broken his silence on alleged death of Buhari's chief of staff. 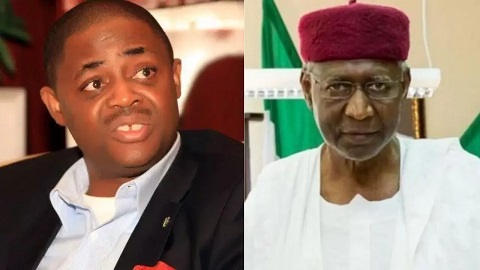 FFK and Abba Kyari
Femi Fani-Kayode, former Aviation Minister and chieftain of the Peoples Democratic Party has said that online reports that the Chief of Staff to President Buhari, Abba Kyari, has died after contracting coronavirus is untrue.
Social media was agog on Thursday April 2nd with the news that Kyari who is currently being treated for Coronvirus, had passed on.
FFK while reacting to the story, said there is not truth in it and blasted those peddling it.
Taking to his Twitter handle to react, he wrote:
"It is not true that Abba Kyari, the Chief of Staff to @MBuhari, is dead. Those that are behind that rumour are vicious and heartless. I remain opposed to the @MBuhari  admin. but to wish or proclaim someone dead simply because you disagree with him politically is unacceptable."