Nigerians took to social media to attack Immigration officers for setting a disciplinary action against female officers who took part in the trending bopdaddy challenge. 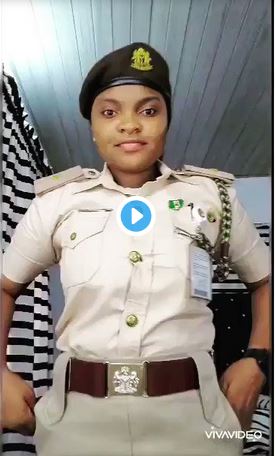 In the challenge, female participants from across the world wear their usual clothing at the beginning of the video and later changed into more elegant attires after the camera of their phones were covered for a while.

Some female officers of the government agency then decided to hop on the challenge, which didn’t seem to go well with the authorities of the NIS.

In a query by the immigration authorities, the officers were accused of “indecently flaunting your bodies” and desecrating the service “uniform/beret and the use of inappropriate language thereby, sabotaging the values upheld by the service.”

“To state the obvious, your act has caused a lot of embarrassment to the NIS and in line with our standard as a paramilitary organization is considered scandalous and an act unbecoming of an officer and therefore a violation of PSR 030401 and 030402,” Iam Haliru, deputy comptroller-general, said in the query dated April 15.

“This is a serious misconduct liable to dismissal from service. In view of the foregoing, therefore, you are requested to make a representation, if any, within 72 hours on receipt of this letter, why disciplinary action should not be taken against you for violation of the following; PSR 030301 (a)(i) immoral behaviour, PSR 030402(t), PSR 030402(w) any other act unbecoming of a public officer.”

Another memo by deputy comptroller-general, asked the comptrollers of the federal capital territory (FCT), Nnamdi Azikiwe International Airport and Lagos state command to release the affected officers so that they would be able to report to the service’s human resource management at the headquarters in Abuja, The Cable reports

“They are to report to the office of the assistant comptroller-general in charge of human resource management at the service headquarters,” Haliru said in another memo dated April 14.

Nigerians have however reacted to the move to discipline the female officers, with many calling out the agency for being ‘too rigid’.

Dear @nigimmigration, there is nothing immoral about this video. Infact, if anything it humanizes and creates a positive image of those in your uniforms.

Please withdraw the query you have issued and join Nigerians to celebrate these your good officers.

If this is how he acted swiftly on the corruption in getting your passport or renewal.

You see, it seems this people deliberately don't want Nigeria a better place. How will you leave your main job to act on what is posted on Social Media. https://t.co/426NaPSIIo

So, some officers in the Nigerian Immigration service did the Bop daddy/don't rush challenge, and because they are women, the Comptroller General is now trying to penalize them for it. "Indecent flaunting of bodies" (Thread) pic.twitter.com/1mdFN4m6cJ