Two persons have been confirmed dead in an accident involving a bus and a motorcycle along the Lagos-Ibadan Expressway. 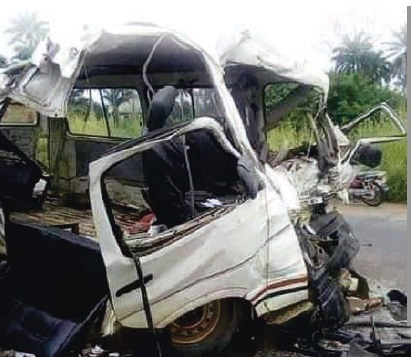 Two people have died in an accident on the Lagos Ibadan Expressway.

The Public Relations Officer, Traffic Compliance and Enforcement Corps (TRACE), Babatunde Akinbiyi, who confirmed the incident to NAN, said that the accident, which occurred around 9:30 a.m., was caused by reckless driving and wrongful overtaking on the part of the driver of the bus.

According to him, due to reckless driving, the bus marked AME-805 XA hit the moving Bajaj motorcycle marked SGM-149 V; after that, the bus lost control and rammed into a moving trailer from the rear. The trailer did not stop.

“The bus was transiting from Berger to Ibadan. Eighteen passengers comprising 13 males and five females were on board the bus when the accident occurred".

Akinbiyi also disclosed that six people were injured while two male adults died in the accident.

He added that the injured victims were taken to Victory Hospital, Ogere, Remo, while the deceased were deposited at the State Hospital’s mortuary in Isara Remo.