Abba Kyari has been described as an intelligent man who could have been the second in command when Nigeria returned to democracy in 1999. 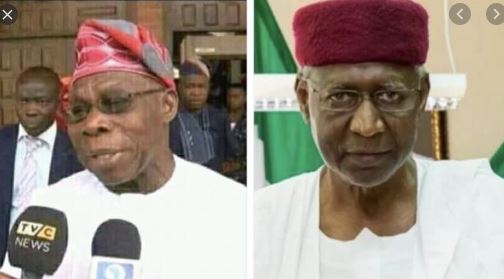 Mamman Daura, a nephew to President Muhammadu Buhari, says Abba Kyari was recommended as running mate to Olusegun Obasanjo in 1999.

Kyari, who died of complications from COVID-19 on April 18, was chief of staff to Buhari.

In a tribute, Daura described Kyari as an intelligent man who could have been the second in command when Nigeria returned to democracy in 1999.

“These times coincided with the country’s return to democracy and Malam Abba was among those enthusiastically espousing the cause of General Obasanjo,” Daura said.

“On his selection as PDP candidate, a group of women and youths in the PDP lobbied Obasanjo to pick Malam Abba as his vice presidential running mate. After heated debates, Obasanjo eventually picked Alhaji Atiku Abubakar.

“In the 2003 elections, Malam Abba was in opposite camps with President Obasanjo. General Muhammadu Buhari had declared his intention the previous year to contest the presidency and Malam Abba joined his team and worked wholeheartedly in all the campaigns through the drudgery and injustices of the 2003, 2007 and 2011 elections without losing hope or sight of the ultimate goal.”

Daura said the late Kyari stood firmly behind Buhari and his “perseverance paid off” in 2015 when Buhari won the presidential election.

“To his great surprise, the president appointed Malam Abba as the chief of staff. Fortified by the rigours of a Cambridge education and varied experience in banking, industry, investment and journalism, Malam Abba set himself the task of defining the role, functions and status of the chief of staff. He started by consulting previous incumbents of the position he could reach as a way of educating himself of the challenges ahead of him,” he said.

Below are other things Daura said about the late chief of staff.

Daura said the late Kyari lived a very simple life and avoided flamboyance which many in his class were known for.

“He lived a fairly simple life and habitually wore a red cap, white clothing and black shoes. He had to be forced by his friends to change the cap and he wore the shoes to the ground before buying a new pair,” he wrote.

TOOK A JOB BELOW HIS STATUS

Duara, who was editor of the New Nigerian in the 70s, said Kyari had come to him with an offer to work in the newsroom.

Even when there was no space that he could occupy in the news company, Kyari didn’t hesitate to take that position with a pay below what he had earned previously.

“I first set eyes on Malam Abba about 47 years ago. I was at my desk at the New Nigerian newspapers office scribbling something or other when the gate messenger brought a sheet of paper with a name ‘Abba Kyari Chima’ wanting to see the editor,” he wrote.

“When he came in he looked winsome and slightly diffident. After pleasantries I wanted to know his reason for coming to New Nigerian. He said he read and liked an editorial in the paper a few days earlier headed: ‘Solution looking for a Problem’ and he resolved to work with us. After swift enquiry, I was told there were no vacancies in the newsroom nor in sub-editing. But a lowly position existed as proof reader as someone had just left.

“I was about to apologise to him that what was available was beneath his station. Malam Abba quickly said: “I will take it.” After formalities he was enrolled as a staff of New Nigerian.

“By ‘taking it’ he was taking a sizeable cut from his previous teaching job’s pay as the salary scales in the New Nigerian where Malam Abba and I worked were historic in their frugality. You couldn’t get fat on the wages of the New Nigerian in the mid -70s.”

As Kyari ventured into banking career, Daura described him as one of those who helped revived the United Bank for Africa (UBA).

He would eventually become the bank’s chief executive.

“When Mr. Hakeem Belo-Osagie assembled a team of investors and managers to help revive the collapsing UBA, Malam Abba was persuaded to join the group and after weeks of diligence the group acquired UBA and Malam Abba joined the bank as a Senior executive,” he wrote.

“Needless to relate, he eventually became the bank’s chief executive and on retirement was persuaded to remain as non-executive vice-chairman.”

HE WAS INFLUENCED BY INDIAN PROFESSORS

Daura said as soon as he came into office, Kyari started consulting previous incumbents of the position he could reach as a way of educating himself of challenges ahead.

“Malam Abba was at odds with many senior members of the government on economic policies. Many Nigerian elites tend to lean towards the Bretton Woods one-size-fits-all solutions long discredited and demonstrably failed in so many so-called third World countries. Malam Abba tended to look inward for solutions and was not an ideologue,” he wrote.

“He was heavily influenced by two Nobel laureates, the great West Indian economist, Professor Arthur Lewis and the eminent Indian Professor Amartya Sen, the latter Malam Abba frequently called to exchange views. Despite holding firm views, his advice to the president was dispassionate, even-handed and did not hide unpleasant facts, in the best traditions of public service. In point of intellect, he stood above all ministers and special advisers in this government.”

GAVE HIS MAIDUGURI HOME TO IDPs

Since he was no longer living there, Kyari reportedly made his house in Maiduguri, Borno state, available for internally displaced persons (IDPs).

According to Daura, at least 75 persons were taken care of by the ex-chief of staff and this gesture, he never made public.

“Few people knew that over ten years ago, he turned his house in Maiduguri (since he no longer resided there) into accommodation for IDPs. At some stage there were 75 people whom Malam Abba was feeding, clothing and looking after; in addition to their children’s education,” Daura wrote.