The deaths of prominent persons in Kano state as a result of strange disease continued on Sunday. 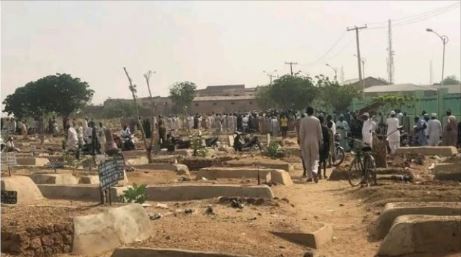 Cemetery
Kano's harvest of deaths continued on Sunday with the demise of Aminu Yahaya, a former commissioner of education in the state.
This comes after many had suspected the deaths could be as a result of COVID-19, but a government official in the state claimed the deaths are as a result of hypertension, acute malaria, diabetes, among others.
The strange deaths continued despite the assurance of government that the situation is under control, according to a report by TheCable.
On Sunday, Muhammad Garba, commissioner of information had begged residents not to panic over the strange deaths assuring that “government is on top of the situation and the mystery or whatever it is will soon be unravelled”.
In the last one week, the state has recorded multiple deaths, with Sabitu Shaibu, deputy head of the state task force on COVID-19 putting the toll at 640.
TheCable gathered that Yahaya died at his residence located at Gandun Albasa quarters in the city and has been interred in accordance with Islamic rites.
Mudi Mudi, a senior official of the Kano Secondary School Management Board (KSSMB), also died on Sunday.
TheCable had earlier reported the death of Balarabe Maikaba, a professor of mass communication, at Bayero University in Kano.
Maikaba died on Sunday afternoon.
The loss of lives in the ancient city not only affected the elite, the lower class of the society also had their share. A commercial transporter simply identified as Boluwaji passed away in the early hours of Sunday.
An Ogun born commercial driver better known as “Action Governor” also lost his life under strange circumstances on Sunday. A local businessman simply identified as Sunday slumped and died along Katsina road within Kano metropolis.
A witness told TheCable that the deceased was walking along the dual carriage way when the incident occurred. Residents were said to have called the authorities for the evacuation of his corpse but it was still lying there as of 5pm on Sunday when TheCable visited.
Some undertakers in the state had earlier expressed worries over the increasing rate of burials.
Osagie Ehanire, minister of health, had said the federal government had set up a panel to probe the strange deaths in the state.
Femi Falana, human rights lawyer, asked the federal government to make the findings of the panel public.
Top Stories