A government official in Niger state has attracted the attention of people after gifting his wife N400,000 phone. 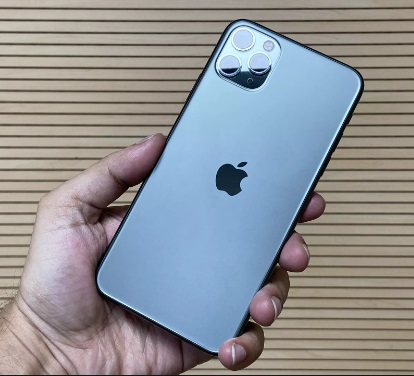 iPhone (File photo)
Residents of Niger State have been outraged after news of the lavish spending of Commissioner for Local government and Chieftaincy Affairs, Alhaji Abdulmalik Sarkin Daji, in the face of the economic hardship faced over the COVID-19 pandemic.
It was gathered that the Commissioner had flaunted the N400,000 phone he gave his wife as a gift on social media leaving many people in a state of anger.
He had presented her with a new iPhone 11 pro as a surprise gift after a surprise lavish birthday.
Some angry residents of the state took to social media to express their annoyance, accusing him of siphoning government resources to spend lavishly while others are suffering.
A Facebook User, John Ekpe wrote: “This Commissioner is heartless. This shows he is making of our plight. ”
Another Facebook user, Aliyu Enagi commented: “25 workers salary @ 30,000 each. Allah ya karba. Imagine how many salaries this IPhone will pay?”
Another Facebook user, Muhammad Teekay also wrote with an emoji of outrage, ” 20% of my mum’s salary’.
Danjikada Agaie wrote, “See where Local Government 20% Enter ooo. May the Almighty help us…”
Others made comments like: “see una 20 percent, they don use am buy iPhone”.
A search on the price of the iPhone 11 pro shows it sells for N400,000.
Apple pegged the smartphone at $999, $1149 and $1349 for the 64GB, 256GB, and 512GB models respectively.
Commenting on the amount of the phone, other Facebook users said even if he is free to give his wife a phone for her birthday, he should not have flaunted it on the social media when his ministry is responsible for deduction of workers’ salary.
Top Stories