A man took to Twitter to narrate how his friend's car which was snatched by robbers was recovered through the help of his wife. 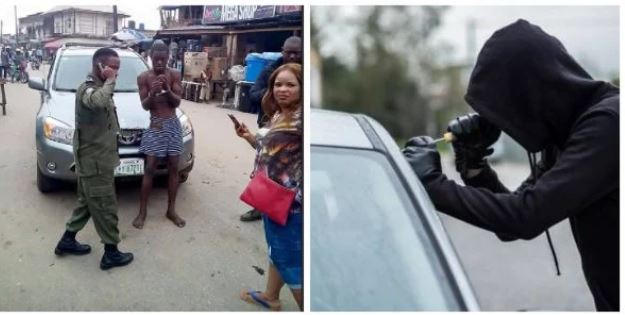 A smart wife has just helped her husband recover his stolen car a year after it was stolen in Abuja.

According to a narration by Twitter user, Henry Okelue, his friend’s car was stolen in Abuja early 2019 and while driving around the city on Friday, a car overtook his car and lo and behold, it was his car.

But the most interesting part was that it was his wife who identified the car via its plate number.

Read the Full story below;

So one of my guys had an interesting experience a few days ago.

He was driving with his wife into Abuja city on Kubwa expressway when a car overtook them. His wife screamed “follow that car” as her eyes caught its registration number.

My guy did not understand why she wanted him to follow the car. It was not as if they were driving in a convoy. So he ignored. She insisted, telling him the registration number looked familiar  like that of their car that was stolen early 2019.

That shook him to his senses and made him accelerate to catch up with the car. Lo and behold, it was his car. So he kept a safe distance behind the car, hoping they will pass through a police checkpoint. Luckily, the car exited the Berger bridge into the road going to Zone 6

Which meant it was going to meet the police check point under the Berger Bridge. So my guy overtook the car, stopped at the checkpoint, jumped down and notified the police that the car coming behind was a stolen car. Police does not like to use ear to hear “stolen car”.

They flagged the vehicle down. Luckily he had screenshots of the original car papers on his phone. That was how the journey from coming out of his office and looking for his car inside gutter, under bottle cover, inside his pocket, to going to SARS HQ at Guazape began.

The car robber stole the car in Abuja and drove it straight to Kano. In a case of “everyday for the thief, one day for the owner”, the stupid criminal just sold the car to a car dealer “asit is”. Did not change car color, did not change registration.

The doomed fella simply got an affidavit that he lost the original car papers. The photocopies were in the pigeon hole at the time of theft. So a guy from Kaduna came and bought the car from the car dealer. He in turn sold it to another person in Kaduna.

Unfortunately for the new “owner”, he had a need to travel to Abuja that day. SARS arrested the car driver. He gave them the details of who he bought it from in Kaduna. So SARS went and nabbed that one. That one in turn said it was somebody in Kano that he bought it from.

SARS nabbed that one too and he is currently helping them to locate the car thief in Kano. As it is,that car thief’s professional career has come to an end. Also the people who bought the stolen car will need God to come help them too. Man mi now has his car back, thanks to luck".