The National Agency for Food Drugs and Administration Control has denied certifying rice distributed in Oyo which was found to be bad for human consumption. 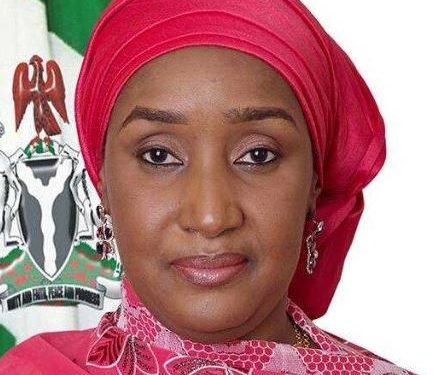 Sadiya Farouq
The Minister of Humanitarian Affairs, Disaster Management and Social Development, Sadiya Farouq, has been drawn in a 'fight' with the the National Agency for Food Drugs and Administration Control (NAFDAC) over the rice distributed in Oyo State.
The drama started after NAFDAC Director-General Prof. Mojisola Adeyeye had said that her agency was not invited to test the rice distributed in Oyo State by the Federal Government.
Recall that the rice was alleged not to be good for human consumption.
She said that her agency was only invited to take samples of rice from Idi-Iroko, Ikeja and Ogun State.
NAFDAC clarified allegations by the Oyo State Government that the 1,800 bags of rice it got were infested with weevils and unfit for human consumption.
It said: “We got an invitation to sample rice from Idi-Iroko from Ogun and Ikeja Customs. Our officials went to Idi-Iroko and Ogun to sample the rice and they also went to Ikeja to sample rice. Some of the samples are still in our laboratory in Oshodi. We tested the samples and they passed.
“The one for Oyo State, I cannot say anything because NAFDAC was not called by the Ibadan Command or the Southwest Command of Customs to come and check samples in Ibadan. So, I cannot say anything about the Ibadan Command rice that went to Oyo and possibly to Osun State.”
Farouq had initially said: “The rice was handed over to us by the Nigerian Customs Service and it was assessed by NAFDAC, who issued a clearance before the goods were released for onward distribution to the states.

“So, as far as we are concerned, the rice was certified fit for human consumption.”
Reacting to the claims made by NAFDAC, the minister yesterday during the daily briefing by members of the Presidential Task Force on COVID-19 said her ministry got a certificate issued by NAFDAC.
She said: “We still stand by what we said because that was what was conveyed to us by Customs and we have a certificate to that effect.
“The certificate indicated that the rice given to us is fit for human consumption and that was before I even launched the distribution in Lagos State. We will make that certificate available later today.”
Farouq, however, noted that both agencies of the government would sort out the obvious communication gap.
“Let me also remind us that NAFDAC, Customs and the ministry respect each other’s mandate while carrying out our responsibilities. So, Nigerian Customs Service and NAFDAC, I am sure will sort the communication gap and we will report back to this platform once that is done.”
On the expansion of the national social register as directed by President Muhammadu Buhari, the minister said three million people are on the register.
She said: “The president said we should expand the social register by one million. That has begun already. As at today, we are three million and project to be at 3.1million with the existing one that we have already, which is 1.2million and we are anticipating reaching a target of 3.6million by the middle of May.
“Ebonyi and Ogun states that were not on the register are being captured and by next week, they will be able to join the social register before we move to the beneficiaries’ register.”
On the demand that names of beneficiaries of government’s intervention be published, the minister said it was against the norm and human dignity.
“We cannot publish names of beneficiaries of government’s intervention or any kind of intervention because it is against the norm and human dignity, but we have the record.”
Top Stories