The governor stated this Saturday when he phoned into the situation room, a programme about coronavirus on the state’s broadcast stations. 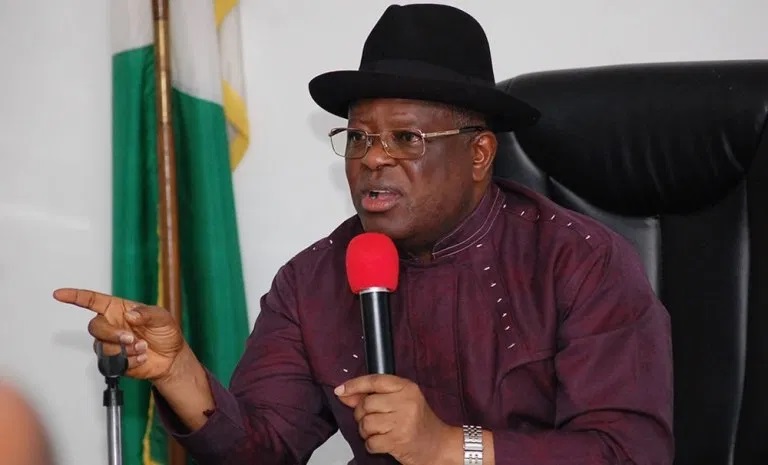 Governor David Umahi has confirmed two more cases of Covid-19 in Ebonyi State bringing the total of confirmed cases in n the state to 5.

While four of the patients are returnees from other states in the country, the fifth patient, according to the governor, though a returnee, may have gotten infected at the state’s temporary isolation centre where returnees and suspected cases are kept until they are tested for the virus.

The governor stated this Saturday when he phoned into the situation room, a programme about coronavirus on the state’s broadcast stations.

According to the governor, the 4th case returned from Lagos with the virus while the fifth case got the virus from the third case at the Pa Oruta Ngele Stadium Abakaliki temporary isolation area.

“The 4th case is a 22 years old boy who leaves in Ojo Lagos. He left Lagos on 26 and entered Ebonyi through Nkalagu border. And from there entered bus to Ezzamgbo junction. Thereafter he entered bus to Ede Ishieke in Ebonyi local government,” the governor said.

He said the man was intercepted at Ishieke by the state’s COVID-19 task force and brought to the stadium where a sample was collected from him which turned out to be positive.

On the fifth case, Mr Umahi said she returned with her family from Énugu State, where she resides, but was brought to the holding area in Abakaliki in line with the policy of the state government that anyone who comes in from outside the state must be tested.

“The fifth case is a 24 years old girl. A hair dresser from Awgu in Uburu in Ohaozara Local Government Area. She resides at No 30 Queens close Ọkpara Avenue in Enugu.

“She was picked from Uburu to stadium. While at the stadium she had contact with the third case and this evening her result came out and she tested positive.”

Mr Umahi however noted that the family members that she came back with all tested negative.

He said they will still be kept at the holding area and monitored for the next 14 days.

Mr Umahi said that he has also directed the medical team to go for contact tracing of all the patients’ contacts.

The governor while urging residents to remain vigilant urged them not to panic as the state government was doing all in its power to prevent the spread of the virus.

He commended some local government chairpersons who he said are doing well in effectively manning their borders.

The governor also lamented the unseriousness of others warning that there will be dire consequences for such persons after the war on the pandemic is over.

He said all the confirmed cases are doing well at the isolation centre.

“In the next one week, I am sure that they will be cleared to go home after they must have tested negative twice”, he said.