Due to the lack of PPE, nurses in Ogun state have been spotted wearing polythene bags to treat a coronavirus patient. 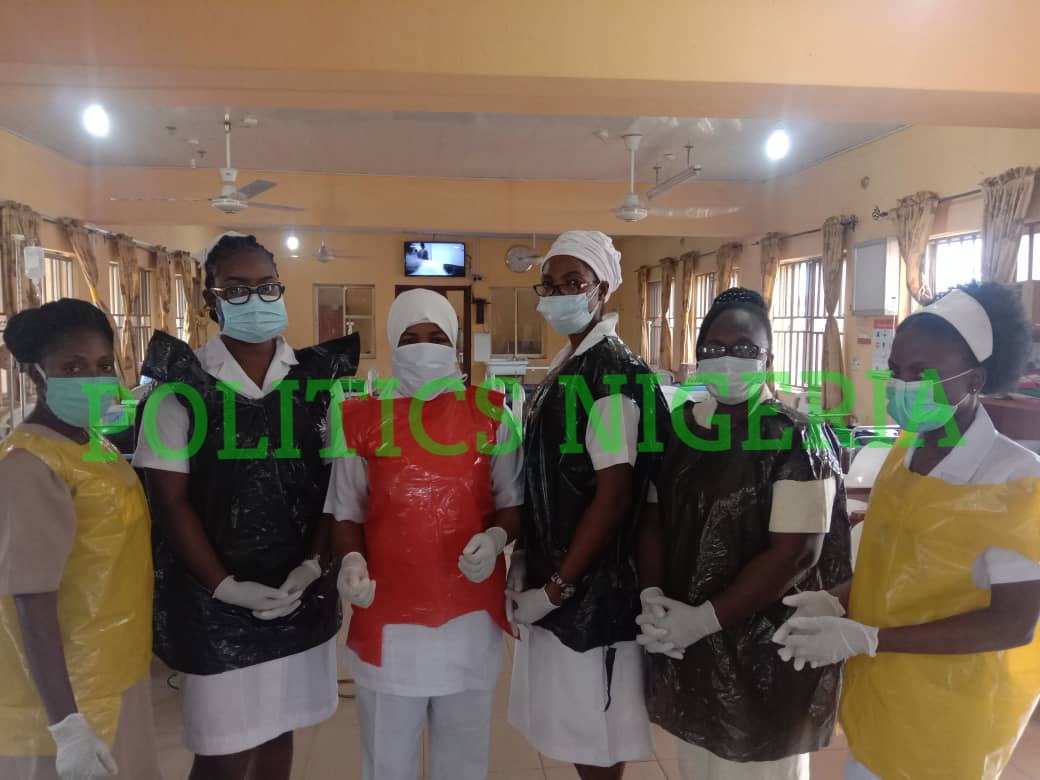 Nurses wearing polythene bags in Ogun state to treat covid-19 patient
As a way of preventing them from contracting coronavirus, some nurses of the Federal Medical Centre, Abeokuta, Ogun state have been seen wearing polythene bags.
According to Politics Nigeria, one of the nurses said they were forced to wear polythene bags due to inavailability of PPE.
Recall that two persons, including a pregnant woman who died on Saturday, tested positive for the infection in the hospital. The second case, a 97-year-old man, had been transferred to the Ogun state COVID-19 isolation centre in Ikene. Moreover, some of the health workers who came in contact with those infected have been told to isolate.
One of the medical doctors who came in contact with the aged man, Mr Ashimi, has also been transferred to Ikene for isolation.
Accordingly, the Emergency Treatment Room (ETR) and the Gynecology Emergency unit, where the confirmed cases were earlier admitted, have been closed down for fumigation.
On Monday, two women admitted at Female Medical ward were suspected to have contracted the disease after showing symptoms. This caused an uproar at the facility with the health workers of the affected unit demanding for Personal Protective Equipment (PPE), a protective gear recommended for the treatment of infectious diseases.
It was gathered the nurses had to improvise with the waste bags after the management denied them the PPE on Monday afternoon.
Later on, some public health practitioners protested the irregularities when they saw their colleagues on the materials. However, the spokesperson of the hospital, Orisaju Segun, denied knowledge of the incident when this paper contacted him on Monday.
Also, the head of the nursing department claimed the information about the non-provision of PPE is false. "That is not true. They were not denied PPE," She told POLITICS NIGERIA.
Meanwhile, when she could not explain what led to the nurses putting on a polythene bag, she promised our reporter that the issue will be investigated.
Reacting to this, the President of the National Association of Nigerian Nurses and Midwives (NANNM), Adeniji AbdulRafiu expressed surprise in a telephone interview with POLITICS NIGERIA.
"I am surprised that a nurse will agree to wear a polythene bag. This really baffles me," He said.
Mr AbdulRafiu also promised to do a thorough finding to get more information about the situation.
He then stated that nurses who allow such are doing that at the detriment of their lives. " We have told them not to work if adequate preparations are not made," the national President emphasised.
Top Stories