Drama As Nigerians Evacuated From Dubai Protest In Lagos, Say They're Treated Like Prisoners


They claimed that the hotel, where they are being quarantined in Lagos, is surrounded by soldiers who do not allow them to even get fresh air. 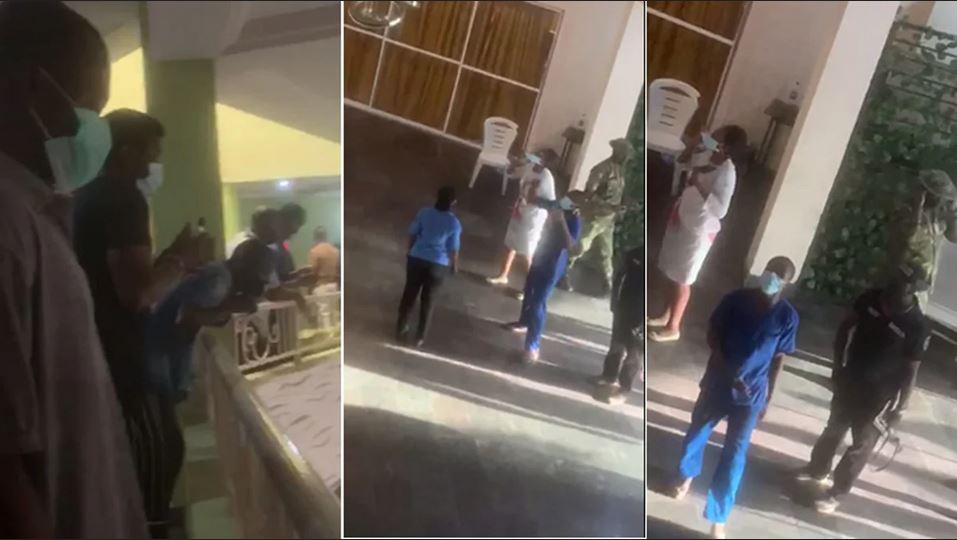 Screenshots of a video shared with The Punch of the protesting returnees in their hotel in Lagos.

According to The PUCNH, some Nigerians recently evacuated from Dubai, United Arab Emirates, have lamented that they are being treated like “prisoners”.

They told The PUNCH that the hotel, where they are being quarantined in Lagos, is surrounded by soldiers who do not allow them to even get fresh air or receive some sunlight within the compound.

One of them, who prefers anonymity for fear of being victimised, said, “Sincerely, we have not had it good since we returned from Dubai. We all tested negative for COVID-19 but we are being treated as if we have the disease.

“We have been here for three days now but we have not been allowed to even breathe fresh air or even feel sunlight on our skin. It is as if we are in prison. Even the food we are being given is not good at all. We are just managing it.”

Another evacuee told The PUNCH that no government official had called or visited to check their welfare except some officials of the Nigeria Centre for Disease Control who visited them on Saturday morning.

“We have been complaining about this but everything has fallen on deaf ears. No one from the government has called to ask about our living conditions. It was this morning (Saturday) that some NCDC officials came to check our health status.

“We are not allowed to even stroll within the compound. We are just inside our rooms. If things continue this way, some of us may even fall sick from being idle,” he said.

The Minister of Information and Culture, Alhaji Lai Mohammed, neither responded to calls nor a text message on Saturday.

The Chairman/Chief Executive Officer of Nigerians in Diaspora Commission, Abike Dabiri-Erewa, however, said inquiries should be sent to the Minister of Foreign Affairs, Mr. Geoffrey Onyema.

She said, “All COVID-19 issues are handled by the Minister of Foreign Affairs in consultation with the PTF (Presidential Task Force). NIDCOM’s role was to help co-ordinate the names of those who wanted to return, working with the mission.

“And we got about 4,000 from about 75 countries. We are not involved in the logistics of their return. So please direct your questions to Hon. Minister of Foreign Affairs who is in total control.”

No fewer than 256 evacuated Nigerians arrived in Lagos State from the United Arab Emirates on Wednesday.

They arrived at the Murtala Muhammed International Airport, Lagos, via an Emirates Airline about 07.40pm.

The PUNCH reports that upon their arrival, the evacuees were placed on 14-day quarantine in line with the government’s COVID-19 protocol.