Why We Won't Postpone Governorship Elections In Edo, Ondo Despite COVID-19 - INEC


A spokesperson to the commission, Festus Okoye, made the explanation in an interview on ARISE TV. 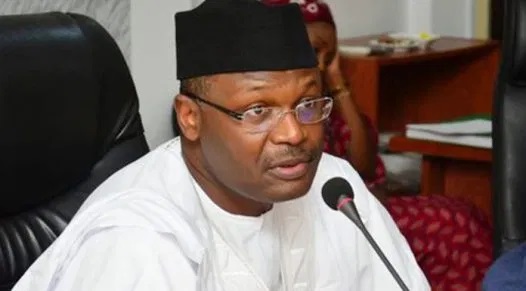 The Independent National Electoral Commission (INEC) has explained reasons why it would not postpone the upcoming gubernatorial elections in Edo and Ondo states despite the ravaging coronavirus pandemic in the country.

A spokesperson to the commission, Festus Okoye, in an interview on ARISE TV, Monday, said postponing the governorship elections in Ondo and Edo states could make INEC lose the right to pick the dates for elections in future.

INEC in February fixed the date for the governorship election in Edo for September 19, while that of Ondo State was fixed for October 10.

Subsequently, after the pandemic took a toll across the nation, INEC in March, postponed the scheduled governorship bye-elections in Plateau, Bayelsa and Imo states.

But with the increasing number of cases of the respiratory illness across the country, there have been concerns whether it is safe for the commission to conduct elections especially in the light of physical distancing measures to curtail further spreading of the disease.

Meanwhile, Mr Okoye cited the 1999 constitution, which provides INEC the freedom to conduct an election “not earlier than 150 days and not lesser than 30 days to the expiration of the tenure of an elected office holder.”

He added that while the commission is aware of realities of the coronavirus pandemic ravaging the country, “the implications of not adhering to the law, could make INEC lose the rights to pick the date of elections going foward.”

“The commission is a constitutional body, and its powers are derived directly from the constitution section 178(1) says that it is the function of INEC to fix the date of elections, but subsection 2 says that an election to the office of the governor shall be conducted not earlier than 150 days and not lesser than 30 days to the expiration of the tenure of the last holder of the office.

“The implication is that the governor of Edo was sworn in on November 11 and we must conduct the governorship election in Edo State on or before October 13, 2020; while that of Ondo State must be conducted on or before January 25, 2021.

“The truth of the matter is that the country is faced with a situation of conflicting rights. The rights of the Nigerian people to elect their representative and also their rights to life, not to go to a polling unit and die.

“So, we recognise there will be problems (and) challenges, but we are on point and we are determined to deliver on our mandate,” Mr Okoye said.

He added: “if we fall off outside the constitutional window, the implication is that going forward, the commission does not now have rights and wherewithal to pick the date of election(s).”

The official also said the commission would release a timetable and schedule of activities for the two elections on June 1.