Two fake soldiers have been apprehended by the police for allegedly killing a police sergeant in Lagos. 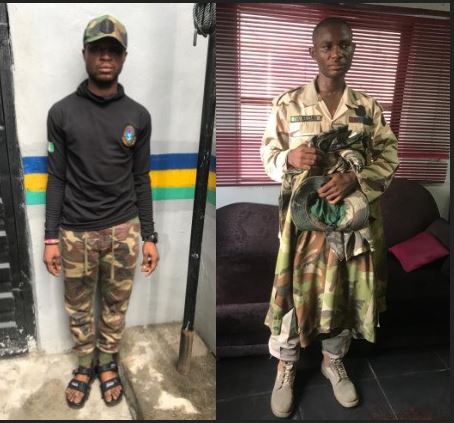 The Lagos state police command have arrested two deserted soldiers in connection with the murder of a police sergeant.

Elijah is said to be among the three suspects on Police wanted list for violent crimes. Four pairs of military fatigues were recovered from his house. He claimed to have deserted the military in 2015 when he was deployed to the Northeast to fight insurgency. He has been in Ojo area since then, where he has been terrorizing members of the public.

The second suspect, Ezeh Frank Joseph was arrested in his apartment at Imude Pako Area, Era road, Ajangbadi on Sunday May 17.  Joseph claimed to have deserted the military while undergoing basic military training.

Bala in his statement said both men were arrested over the shooting and killing of Police Sergeant, Onalaja Onajide, attached to Ilemba Hausa Division.

According to the statement, the shooting incident happened on May 10 at about 9.40pm when unknown gunmen fired gunshots at the Divisional Police Officer, Ilemba Hausa and the Station Guard, Sergeant Onalaja Onajide. The DPO survived the gunshots but the Station Guard died from the pellets wound.

Bala says the first suspect was earlier at the Station to solicit the release of his motorcycle which was impounded by the Police for violating the ban on the use of commercial Motorcycles. Not happy with the DPOs refusal to release the motorcycle to him, he decided to launch the deadly attack.

The police spokesperson says investigation is still ongoing while the suspects will soon be charged to Court.