Officers from the Minneapolis Police Department in US have been sacked following the death of a black man during arrest. 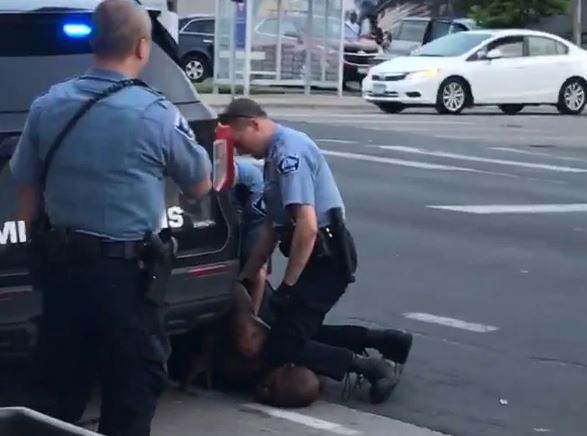 The police officer choked the black man to death with his knee
Four Minneapolis Police Department officers have been sacked on Tuesday afternoon, less than 24 hours after the brutal arrest of George Floyd that left him dead.
According to NY Dailynews, Floyd died after a white police officer used his knee to choke him for over 10 minutes as he cried out that he can't breathe.
“This is the right call,” Mayor Jacob Frey wrote on Facebook after Police Chief Medaria Arradondo announced the firings.
The four officers have not been identified.
Two officers, identified as Derek Chauvin and Tou Thao by the Minneapolis Star Tribune, were filmed Monday night at the 3700 block of Chicago Avenue South, arresting a man later identified as Floyd.
It’s unclear if Chauvin and Thao are two of the fired officers.
The 10-minute video, which has been widely circulated on social media, shows one white officer kneeling on top of Floyd’s neck as he cries “I can’t breathe.”
“My stomach hurts. My neck hurts. Everything hurts,” he says. “Water or something, please. I can’t breathe.”
The Minneapolis Police Department said in a statement that officers were called to a forgery in process around 8 p.m. Monday, with a suspect “sitting on top of a blue car and appeared to be under the influence," but would not clarify the exact nature of the call when reached by the Daily News.
Two officers arrived at the scene and found Floyd sitting in his car, according to police. He got out and “physically resisted officers,” according to the MPD.
Frey called for a full investigation into the arrest and both the Minnesota Bureau of Criminal Apprehension and FBI have been called in.
Top Stories