The fire which started around 2am reportedly raged for hours, destroying goods and other items estimated at millions of naira. 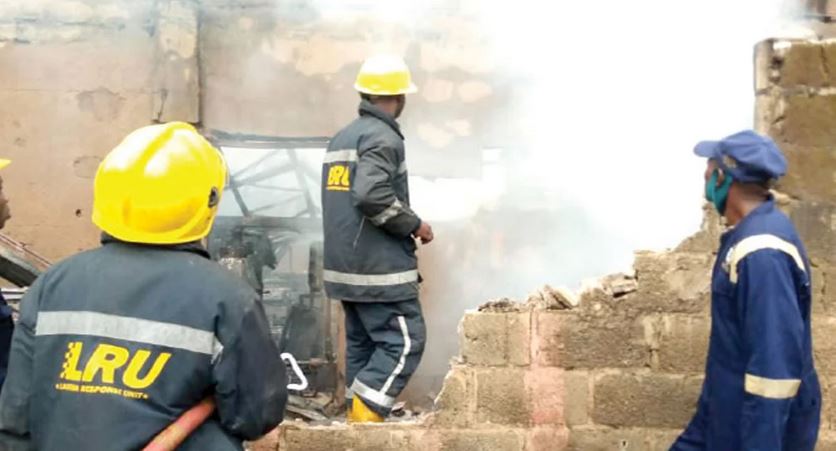 It was an awful Saturday for many traders at Olaleye Market, Shomolu, Lagos State, as a night fire razed 227 shops in the marketplace, Sunday PUNCH reports.

The fire which started around 2am reportedly raged for hours, destroying goods and other items estimated at millions of naira.

Sunday PUNCH learnt that the inferno was put out after a combined effort of firefighters from the Lagos State Fire Service and locals around the market.

The fire reportedly sparked off as a result of an electrical fault in one of the shops and spread to the adjoining stores housing foodstuffs, clothing and irons.

A meat seller, who passed the night around the market, Azeez Hassan, told our correspondent that he was awakened by the blaze.
While trying to quench the fire, he was trapped in a fence, sustaining injuries on his right hand and head.

He explained, “I live in Ibafo (Ogun State) but I usually pass the night around the market. The fire started around 1.30am. I woke up and raised an alarm. People joined me and we started struggling to put it out. While we were trying to prevent it from spreading to another block, a fence collapsed on me.

“We were on it when firefighters arrived. Two of them also sustained injuries. We were taken to the health centre in Akoka on the orders of the local government chairman. But when we got there, the health workers said they didn’t have drugs. They prescribed drugs for us and asked us to go and buy them.”

Our correspondent learnt that a number of shop owners trading in foodstuffs and provisions lost goods to the inferno.

“Owo jona (Valuables burnt)!” A trader identified simply as Mummy Bose, wailed, scrabbling through the rubble aimlessly. “I could not salvage anything,” the middle-aged, woman who sells rice, lamented.

Another woman, who gave her name as Tope, said her provision store was affected, adding that her business ran on loans.

“Who will help me now?” She queried tearfully. “How would I repay the loan? I am in a serious debt.”

Chairman, Ijebutedo Community Development Association under which the market was located, Mr Fatai Adeniyi, said hundreds of traders were affected by the tragedy, adding that only few of them were able to rescue their goods.

He said, “Some people said the fire was caused by an electrical fault. Up till around 9.30am, there were still some pockets of fire. It is a multipurpose market; artisans, foodstuff sellers and provisions shop owners were affected.

“The market contained about 12 blocks of lock-up shops. Over 200 shops were affected. Shops where chickens are sold were not affected. The owners were able to rescue them.”

“Upon arrival at the scene, it was discovered that the Olaleye Market located at Shomolu was completely engulfed in flames. The Lagos State Fire Service, LASEMA fire team and the Federal fire service battled the inferno and prevented it from spreading to nearby residential buildings,” he said, adding that cause of the fire had yet to be ascertained.

LASEMA boss stated that although no life was lost, “property worth several billions of naira was razed by the inferno.”

“The fire was put out at 4:30am. The agency has commenced enumeration and confirmed that about 227 lock-up shops were affected with unknown number of vehicles,” he stated.

Meanwhile, a polythene manufacturing located on Wifunke Street, Ahmadiyya bus stop, Lagos, was also up in flames on Saturday. The fire reportedly started around 7am during production.

Oke-Osanyintolu said, “It was gathered that the fire started from a section of the plant due to overheating of a production unit. No loss of life or injuries recorded at the scene of the incident. The fire was curtailed from spreading to other buildings around.”