Delta state COVID19 patient contests the state government's claim that he has was whisked away from the isolation centre. 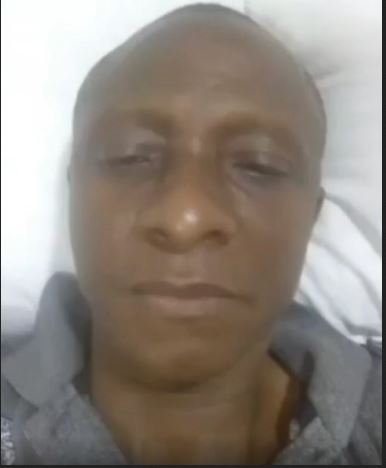 The Delta State Ministry of Health and a COVID19 patient, 53-year-old Michael Mordi, are currently at loggerheads over who authorized his release from the state Isolation center in Asaba, the state capital.

The state Ministry of Health released a statement last night saying some men stormed the FMC Isolation center in Asaba and whisked Mr. Mordi away.

According to the statement, Mr. Mordi who is the Chief Nursing Officer at the Central Hospital, Agbor, tested positive for the novel Coronavirus on May 23rd and was taken into Isolation on May 24th and that ever since he was admitted, he had been problematic and uncooperative.

The Ministry stated that 7 men came to the Isolation center and forcefully removed Mr. Mordi on Monday, June 1.

“Since the admission of Mr Michael Mordi, he has been very aggressive and continually threatened the caregivers and also rejected his medications.

At 6 pm today (Monday), June 1st, against medical advice, Mr Michael Nwachukwu Mordi, obviously consenting, was forcefully removed from the treatment centre by 7 men who claimed to be his relatives and without wearing any protective coverings.

The men therefore, constituted danger to their own health and that of populations and communities with which they come in contact. We use this medium to alert the general public about the public health danger of associating with the patient and with those who have exposed themselves to him.

The Ministry strongly advised that the said patient be returned to the treatment centre for proper care and those who have already been exposed to him should immediately go into supervised self-quarantine for the next 14 days”.

LIB contacted the patient, in question, Mr. Mordi, and according to him, the hospital authorities discharged him from the Isolation center after a video of him complaining bitterly about his condition was shared online with the help of activist, Harrison Gwamnishu.

Mordi said Shortly after the video went viral, he started receiving calls from doctors at the hospital that he has been discharged and that he should start going home as they are tired of his trouble. He said the hospital authorities opened the gate for him where he was received by his family members and friends. He denied the allegation that he was whisked out of the Isolation center.

"After the upload of the video, within one hour, I started receiving calls that I should leave the Isolation center. Eventually Harrison called them again. He has the video where he was telling them that he wants another test. They said no and that he should call my family to come and take me away that I have been discharged.'' Mordi said

When LIB asked him who told him he was free to leave the isolation center, Mr Mordi said

According to Mr. Mordi, he allegedly received a call from the chairperson of the National Association of Nigerian Nurses and Midwives in Delta state, Jegede Alice, who asked him to also leave the Isolation center. ''they said that they don't want my trouble, I should go,'' he said

Mr. Mordi told LIB that while he was in the Isolation center, he repeatedly asked the state authorities to show him the result where it was stated that he is COVID-19 positive but they refused, saying the document is the property of the state government.

He said they also refused to run another test on him when he demanded for it.  According to him, he arrived at the Isolation center hale and hearty but started becoming weak by the day because of the drugs he was given.

LIB reached out to the state Commissioner for Health, Mordi Ononye, to get clarification on the matter but he sent a text message that he was indisposed to speak at the moment.

Watch the video of Mr. Mordi complaining at the Isolation center and also speaking when he was discharged below;

the virus, says the state government have refused to show him the result where it is stated he tested positive for the virus. . . in a chat with LIB, 53 year old Michael Mordi, chief Nursing officer, Accident and Emergency Ward at the Central Hospital in Agbor, said he has been threatened with a sack if he goes public with contesting his COVID19 result. . He said he arrived the hospital hale and hearty but that the drugs he has been given since he arrived the Isolation, 10 in number, is causing him to become weak. . . He is demanding the state Ministry of Health conducts another test on him or show him his result.