This is a look at the alleged involvement of 10 soldiers in the killing of policemen, who were assigned to arrest a kidnap kingpin, Bala Hamisu, in Taraba State, and the statements made by the soldiers. 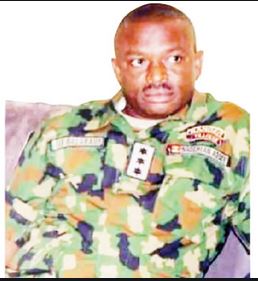 ADELANI ADEPEGBA writes on the alleged involvement of 10 soldiers in the killing of policemen, who were assigned to arrest a kidnap kingpin, Bala Hamisu, in Taraba State, and the statements made by the soldiers at the sitting of the joint investigation panel consisting of the army and the police personnel in 2019.

The curious decision of the Attorney-General of the Federation and Minister of Justice, Abubakar Malami, (SAN), to drop charges against 10 soldiers in the case involving an alleged Taraba State kidnapping kingpin, Bala Hamisu, could be described as a brazen attempt to make a mockery of the nation’s criminal justice system

Wadume was allegedly assisted to escape on August 6, 2019, by the soldiers attached to Battalion 93, Takum, led by Balarabe after the police team which arrested him came under attack from the troops.

The autopsy carried out at the Garki Hospital, Abuja, on August 15 and 16 by a team of pathologists led by AIG Wilson Akhiwu, indicated that the men sustained bullet injuries.

Ediale’s death was attributed to “hemorrhagic shock from lacerated abdominal viscera and fractured vertebra caused by a rifled gunshot to the trunk and mild hypertensive cardiovascular disease.” Musa’s demise, according to the pathologists, was caused by a close-range rifle shot to the head.

Listed as exhibits in the case are the written statements of the defendants, photographs of the victims, autopsy reports, six AK47 rifles recovered from the gang, three empty shells, one live ammunition and six Volkswagen Sharon buses, and one (police) Toyota Hiace bus, among others.

Indications that the soldiers may not face justice became apparent following the refusal of the military to hand them over to the police for interrogation. The soldiers were also not brought to court despite the March 16 order of Justice Binta Nyako of the Federal High Court, Abuja, directing the Chief of Army Staff, Tukur Buratai, to produce them for arraignment.

Below are their roles in the incident and their statements at the joint investigation panel headed by Rear Admiral I.T. Olaiya, which had representatives  from the Nigerian Army, the Navy, Nigeria Police, the Department of State Service  and the Defence Intelligence Agency

Balarabe, 46, commanded the troops who attacked the Intelligence Response Team which was taking Wadume to the Taraba State police headquarters. Wadume was apprehended for killing his victim, Usman Garba, after receiving N106.3m ransom.

Documents also showed that Wadume similarly made several calls to the Ibbi Divisional Crime Officer. The military officer in his statement to the joint investigation panel set up by the Chief of Defence Staff admitted that Wadume was his friend, noting that the alleged kingpin once gave him fish worth N50,000. Balarabe also said that Wadume gave him N200,000 to repair a patrol van which was having mechanical problems.

“The N200,000 he gave me is as a result of the challenges we had with the vehicle for patrolling the community. The local government chairman repaired two patrol vans as the Battalion (military) only gave me N7,000 for four months for fuel,” the captain stated.

On the attack on the IRT team, the commander explained that he was informed by a resident that Wadume was abducted by unknown persons in a bus, adding that he radioed the troops at the checkpoints to intercept the policemen.

He added, “I interviewed one of the men who said they were sent from Abuja to arrest Alhaji (Wadume). We moved the injured to the hospital and the DCO Wukari confirmed that they are policemen.

“When I arrived at my camp, my soldiers, DCO Ibbi, ASP Iorbee and a civilian were removing the handcuffs from Alhaji. After removing the handcuffs, I asked Alhaji to ask the crowd to leave so that we can do our work.” Balarabe disclosed that he asked the DCO to switch off his phone to prevent the military police from reaching him.

There are reports that Balarabe has been rewarded with a course at the Armed Forces Command and Staff College, Jaji, where he is cooling off in a classroom instead of answering hard questions inside the courtroom.

Nothing much was known about Isaiah, save the fact that he was part of the troops who carried out the attacks on the policemen on Balarabe’s orders. He was said to be close to the captain and one of his trusted henchmen.

In his statement, the sergeant who enlisted in the Army in 1994 said he received a call from Balarabe directing him to intercept a Toyota Humber bus in which Wadume was abducted, adding that he was among those who chased the bus which crashed.

He noted, “I discovered one AK47 rifle belonging to the bus occupants on the ground and handed it over to my OC, Capt. Balarabe who ordered us to convey the accident victims to our camp. On reaching there, I saw Alhaji Hamisu in handcuffs and our OC ordered us to chase way the crowd out of our camp.”

Obanye who joined the army as a recruit in his statement explained that Balarabe directed him to ask Iorbee not to bring up the issue of the handcuffs on Wadume if he was asked. “There is a voice record of my conversation with the DCO because my OC (Balarabe) asked me to record all my calls with him,” he stated.

In his statement to the JIP, Markus admitted that the IRT team identified themselves as policemen, but did not tender any proof of identification.

The driver stated, “We saw their vehicle coming and we blocked it. Three of them came down and said they are policemen; we asked them for their ID card but they entered into their bus and drove away. On reaching Gidanwaya, we saw that the bus had somersaulted and then I heard gunshots from the side of the bus.”