An aide of Governor Samuel Ortom of Benue State has been arrested and quizzed by men of the EFCC. 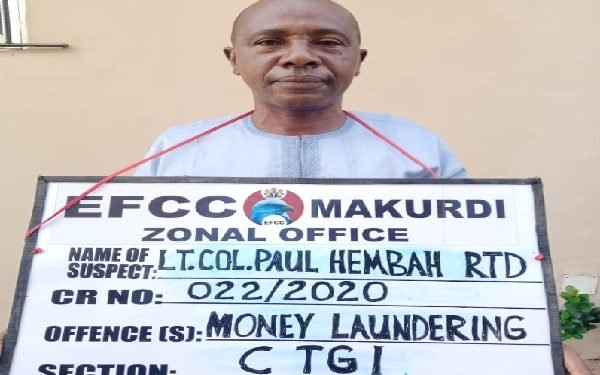 Paul Hembah
Operatives of the Economic and Financial Crimes Commission, EFCC, Makurdi Zonal Office have quizzed Governor Samuel Ortom's aide, Paul Hembah over allegations of misappropriation of funds to the tune of N42million.
Hembah, a retired Lieutenant Colonel and Special Adviser on Security Matters to the governor is said to have allegedly abused his office sometimes in July 12, 2019 when he transferred a sum of N42million from official account of the office of the Special Adviser on Security Matters (his office) to his personal bank account and withdrew same in cash same day.
The said sum was meant for disbursement to Benue State Vigilante Group, BSVG.
The governor’s aide allegedly between October 2018 and May 2020 also abused his office by fraudulently paying the N20million monthly allocation meant for BSVG into personal account of the Commandant of the Group, George Mbessey instead of using the official account of the group.
The alleged offence, if established violates Money Laundering (Prohibition) Act, 2011.
Hembah, who was quizzed for over 6 hours on Wednesday has volunteered useful information to our investigators and would be arraigned in court as soon as investigations are concluded.
It would be recalled that, operatives of the EFCC on May 27, 2020 arrested the State Commandant of the Benue State Vigilante Group, George Mbessey in connection with alleged mismanagement of the N449.5million meant for the Benue State Vigilante Group, BSVG.
Top Stories