Major General Hakeem Otiki (retd), a former General Officer Commanding (GOC) has been dismissed by the army for stealing. 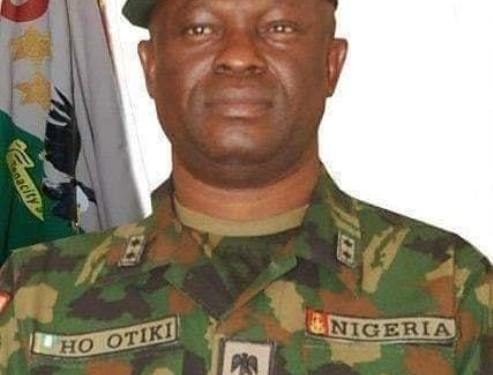 Major General Hakeem Otiki
The former General Officer Commanding (GOC) Major General Hakeem Otiki has been dismissed from Service.
His dismissal was confirmed by the General Court Martial set up by the Military Council to try him for stealing money belonging to the Nigerian Army.
The General Court Martial headed by Lieutenant-General Lamidi Adeosun found the former GOC guilty on all the five counts charges filed against him, according to a report by TheNation.
The former GOC was charged for stealing N100 million and N160 million, respectively money belonging to the Nigerian Army in count one and two and disobedience to Standing Order under section 66 of the Armed Forces Act (AFA),
His dismissal is however subject to confirmation from the Army Council.
Details shortly….
Top Stories