The secretariat was taken over in anticipation of breakdown of law and order over the Appeal Court ruling upholding the suspension of Comrade Adams Oshiomhole. 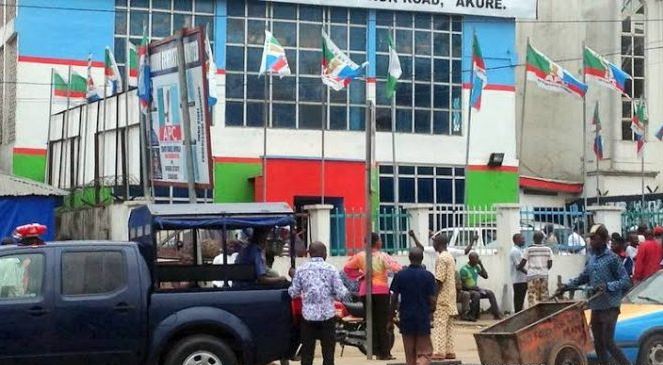 Secretariat of the All Progressives Congress (APC) assumed a battleground in the early hours of Wednesday as several security agents took over in anticipation of breakdown of law and order over the Appeal Court ruling upholding the suspension of the National chairman, Comrade Adams Oshiomhole, Sun News reports.

Strategically located inside and outside the secretariat, the security agents had arrived the party headquarters on two Hilux Patrol vehicles, stopping the journalists covering the party from gaining entrance into the complex.

Meanwhile, the erstwhile acting National Secretary, Victor Giadom, had on arrival as early as 9.00 am, headed into the office, to take over in acting capacity in Comrade Adams Oshiomhole’s absence and in line with the High Court ruling granting him such prayers.

Interestingly, the suspended embattled chairman, Oshiomhole, seems to have respected the court ruling as he stayed out the secretariat.

There was however mild celebration among the staff of the secretariat as they were seen in groups discussing the removal of the national headship, Oshiomhole.

Addressing newsmen, Giadom, ordered the cancellation of all the activities concerning the screening of the aspirants for the Edo state governorship election primaries.

He also ordered that the aspirants would be rescreened, announcing that each aspirant will be informed of when to make appearance, just as he ordered the suspension of the National Organising Secretary, Emma Ibediro, ordering his deputy to assume his position.

In a related development, the party’s National Vice-Chairman (North), Salihu Mustapha, also ordered the security agents not to entertain any media briefing from the opposition camp.