By the time the rainstorm stopped on Wednesday morning, many residents had been rendered homeless with several houses, worship centres and shops destroyed. 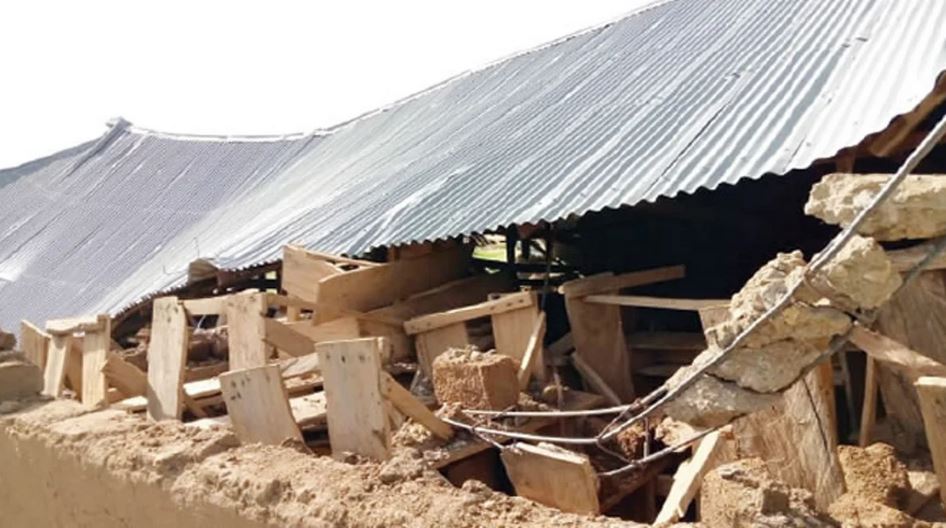 Rainstorm last Tuesday wreaked havoc on several parts of the area. By the time the rainstorm stopped on Wednesday morning, many residents had been rendered homeless with several houses, worship centres and shops destroyed. Electric poles fell; farmlands washed away and crops damaged. The only secondary school in the community, where three of Gobum’s children attended, was also destroyed.

Apart from Langshi, other communities affected by the rainstorm included Amper, Kopgin, Dungun, Munok, and Kogtok. Although no life was lost to the incident, it left the dwellers traumatised.

Gobum told The PUNCH in Jos on Wednesday that since the incident happened, he had been having sleepless nights regarding how his children would continue their education when schools finally resumed after the COVID-19 lockdown.

He said, “Where will my children go to learn when the government reopens schools? Anytime I think of this, I am confused. There is no other secondary school in the community except the Government Secondary School Langshi. But if you go there now, you will weep for the pupils because all the buildings in the school have collapsed due to the rainstorm.”

Gobum said it was unfortunate that the incident occurred at a time when many residents in Plateau State looked forward to returning their children to school after the lockdown.

A couple, identified as Joy and Israel, expressed unhappiness when they spoke to our correspondent on the phone. They imagined how their lives and their daughter’s would have ended as they fled their house when the rainstorm was collapsing the building.

They said they just retired to bed after dinner, hoping to return to their farm the next day, adding that they used some thick clothes to cover their bodies when the cold accompanying the heavy rain became unbearable.

While they were contemplating which clothes to wear, the couple stated that a strong wind blew off their house roof and threw it into a nearby bush. The couple noted that they ran as fast as they could and currently squatting at a neighbour’s house.

“We were just lucky. Had it been that the roof caved in on us, we don’t know what would have happened. But we thank God we are alive. We were only drenched in the house by the rain which also destroyed many of our household items,” Israel said.

A petty trader at Amper town, identified as Emmanuel, also narrowly escaped death by a whisker when an electric pole close to where he was standing suddenly fell to the ground due to the impact of the rainstorm.

“I was on my motorcycle returning to Munok town. I had gone to see a friend whose wife gave birth and it was already late before I left his house. When I got to a point on my way, I decided to stop and urinate. My motorcycle was by the roadside. When I finished, I mounted the motorcycle and was about moving when the electric pole suddenly caved in close to where I was. I was so scared,” he said.

Although he was not wounded by the fallen pole, Emmanuel said the front wheel of his motorcycle was damaged.

Meanwhile, one of the buildings affected by the rainstorm was the St Monica’s Catholic Church in Kopgin community, which had its roof blown off while some parts of the building also collapsed.

When the cleric, Bitrus Koprang’ah, went to the church, he was devastated and said the church had no option but to resort to conducting services under trees.

At Langshi community, a building housing several fertiliser shops was brought down by the wind.

A resident of the community, who gave his name only as John, lamented the tragedy that had befallen his place of work.

“My concern is where will the residents, who are mostly farmers, get their stock from? The extent of damage by the rainstorm is too much in the community,” he lamented.

The condition of Nancy Jude, who owned a shop leading to the outskirts of Amper town, is particularly pitiable as she had just paid rent for the shop when the rainstorm blew its roof away and exposed her goods, leaving the grains and other food items in the shop soaked and spoilt.

“It wasn’t since we rented into the shop. We just restocked the goods about two days before the rainstorm when we heard that the lockdown has been lifted by the government.

“I had not even finished arranging the goods when the rains started. Now, all the food items, including garri, beans, and rice have been soaked after the roof of the shop was blown off by the wind. The situation is pathetic,” she lamented.

It was learnt that the Chairman of Kanke Local Government Area, Emmanuel Lar, has since visited some of the affected communities to sympathise with the residents.

He described the situation as devastating as many affected persons now squat with their friends in the community.

In an interview with our correspondent, Lar, who spoke through his media aide, George Miri, said, “Right now, we are compiling the names of the affected residents and assess the level of damage in the communities.