End Of The Road: Gang Members Who Use Drugs, Substances To Rob Motorcyclists Land In Hot Soup


The suspects, Ibrahim, Shuaibu, Jamilu and Ahmadu, confessed to have stolen over 150 motorcycles since they started operations about three years ago. 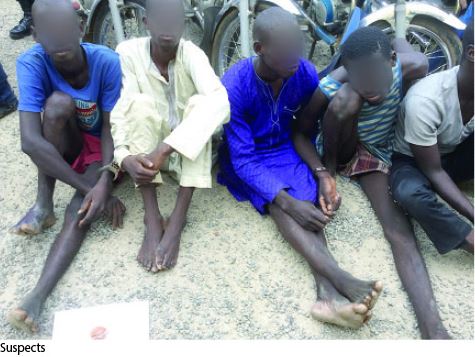 According to Sun News, it was the end of the road for a gang of four motorcycle thieves who offered soft drinks mixed with sleeping drugs to commercial motorcycle operators to dispose them of their machines.

Lock had ran out of the suspects who operated around Gudu, Apo, Kabusa areas of Abuja and Suleja in Niger State when they were arrested by operatives of the Anti-Kidnapping Unit (AKU) of the Federal Capital Territory (FCT) Police Command while trying to steal another motorcycle.

The suspects, Ibrahim, Shuaibu, Jamilu and Ahmadu, confessed to have stolen over 150 motorcycles since they started operations about three years ago.

Found in possession of 21 motorcycles at the time of their arrest, the suspects revealed that they also used powdery substance, which they blew into the air to make their victims drowsy before stealing their motorcycles.

The suspects were paraded recently where they narrated their mode of operation. They said they used to be farmers but left farming when they realised they were not making enough money.

Ibrahim, the ring leader of the group, narrated: said they sold each motorcycle depending on the brand as from N60,000, to willing buyers, confessing: “We started about three years ago when we were no longer making much gains in farming business. The first time we started, we were not using any substance to intoxicate our victims. We used sticks and knives which to threaten them.

“But as time went on, Jamilu suggested the idea of putting sleeping drugs into mineral and juice and give to Okada riders and that was how we started using that method and it worked perfectly. We also had this substance like powder we got from a native doctor that we used and it also worked very well.

“What we did was that we positioned ourselves in twos and stopped Okada rider and told him to take us to a certain place. By this time, we had three bottles of drink in our hands, one for me, one for my partner. We would then give the remaining one to the Okada rider. He would thank us and drank it because we used to go out when the sun was very hot.

“We would make sure the drink was very cold that they would not suspect anything and would just drink it. After drinking it, they would drive a few minutes and started feeling dizzy and parked the motorcycle. We would allow them to sleep and then drove the motorcycles away and sold them.

“We usually took them to remote villages and sold to farmers, hunters and other people who had money to buy. We sold them between N60,000 and N150,000, depending on the grade and brand of the motorcycle. Some brands are in high demand, sell faster and more expensive.

“Apart from mixing sedative drugs in soft drinks, we also used the powder one native doctor gave to us. We used this powder only when we did not get very cold drinks to buy or when we ran out of money to buy drinks because some of the drinks were sold for as much as N300.

“For the powder, we would stop the bike man and negotiated with him. As usual immediately we sat down, we would bring the substance out. We would pour a little on our palm and we would blow it towards their faces. Before long, they would start to slow down. Finally they would come to a stop and slept on the road, and we would zoom off.

“We have been doing this for a very long time now and there is good money in the business. After selling off the bikes, we got as much as N30,000 to N50,000 each on a good day and that is good money. We spent our money on women and drinks.

“There are some women who would not want to talk to you unless you have money. We used the money to carry such women. We also used the money to but smart phones so we could do video recording and download music.

“I regret going into the business and if they let me go, I will not do it again because it is not a good business. I don’t know whether some of the people that we robbed ended up dying as a result of the sleeping drug we put in the soft drinks. We never returned to that same spot until after sometime when the whole thing would have died down.”