How I Nearly Quit My Reelection Battle - Obaseki


Obaseki made these declarations in his acceptance speech at the Samuel Ogbemudia Stadium, Benin in the early hours of Friday. 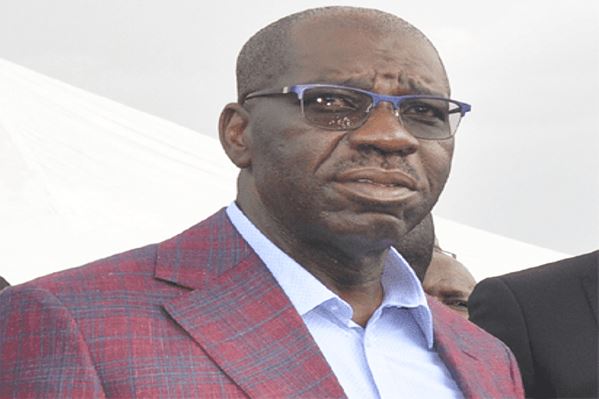 Edo State governor, Godwin Obaseki, revealed on Friday that he contemplated quitting the battle for his re-election bid but support from his family, friends and colleague governors gave him the courage to fight on, The Nation reports.

He also declared that he would be governor again for another four years by defeating on September 19, the governorship candidate of the All Progressives Congress (APC), Pastor Osagie Ize-Iyamu.

Obaseki made these declarations in his acceptance speech at the Samuel Ogbemudia Stadium, Benin in the early hours of Friday, after emerging victorious in the indirect governorship primary election involving delegates from the 192 wards across the 18 local government areas of Edo State.

The Edo State governor, who cast his vote at 9:06 pm on Thursday, rounded off his acceptance speech at 12:29 am yesterday, noting that the Peoples Democratic Party (PDP) provided him a shelter with its large umbrella when he was drenched by heavy rain.

He said history was made with his emergence as the governorship candidate of PDP in Edo State, as his emergence would put an end to godfatherism in the state.

Obaseki expressed gratitude to the three other governorship aspirants in the party: Kenneth Imasuagbon, Omoregie Ogbeide-Ihama and Gideon Ikhine, who stepped down for him to be elected unopposed.

He said that contrary to insinuations that the governorship ticket cost him more than N10 billion, the three chieftains of PDP quit the race without demanding money or any form of compensation.

He said: “Today, history is being made in Nigeria. The victory we are celebrating today has been a long and strenuous walk to political freedom, which as from today, in my election as the standard bearer of our great party (PDP), by the grace of God, I will be governor again for another four years.

“Much has been entrusted to me by the representatives of our great party, and this responsibility will enable me to consolidate on the achievements that we have made.

“It will enable me to deepen good governance in Edo State. It will help us to restore the pride of Edo people and make Edo one of the best states in Nigeria.

“Today marks an electrifying moment in the political history of our state and indeed our country.

“With today’s election, we have demonstrated again that no mountain is too high to stop the aspiration of a people that have put their faith in God and that is called by God to make life better for the greater majority of the people.

“I must admit that there was a time in this struggle when as a mere mortal, I was almost tempted to quit. But I thank God for my family, friends and my colleague governors.

“Let me use this opportunity to thank the Chairman of the PDP Governors’ Forum, Alhaji Aminu Tambuwal, the Governor of Sokoto State and other colleagues, particularly Governor Nyesom Wike of Rivers State and others who encouraged me to move on.

“My desire to improve the quality of life of Edo people has been my daily driving force and also my greatest incentive.”

The Edo State governor also promised to be magnanimous in victory and always remember all the people who stood by him when things were very tough for him politically, particularly shortly before he defected from the APC to the PDP, having earlier been disqualified by the Prof. Jonathan Ayuba-led seven-member screening committee. He said: “I want to thank the leaders of our great party (PDP) who provided us shelter under the large umbrella in the sun when we were pushed out by the broom. “We are actually grateful to those who emphatically told me, ‘Governor Godwin Obaseki, anywhere you go, we will follow.’

“That was an encouragement. I was humbled by such love and I am challenged by it to confront any man-made barrier that will stand in our way to progress in Edo State.

“We could not have overcome our political adversaries without the prayers and guidance of our traditional rulers, religious leaders and all Edo people, particularly our father, the Oba of Benin Kingdom.

“With your continued support, we will make Edo State greater than we met it.

“As children of God, we will be magnanimous in victory, but we will not forget that when the rain was beating us, PDP provided us with the large umbrella.”

Obaseki also urged Edo residents to keep faith with him, stressing that he and his team were convinced that the state could be great again if everyone worked together.

He claimed that great achievements had been made by his administration and that greater accomplishments were still possible in the years ahead.

He said: “We have also made remarkable improvements in security and job creation, among others, and we are certain to do more in the coming years.

“I salute all Edo people at home and abroad, as well as our friends from other states. Certainly, a better Edo State is possible if we are allowed to lead and not the godfathers to lead.

“I implore you to keep faith and to inform you of the tasks ahead.”

Announcing the results of the election, the governor of Bauchi State and Chairman of PDP’s indirect governorship primary election committee for Edo State, Senator Bala Mohammed, said Obaseki polled 1,952 votes, representing 96.4 per cent of the total votes cast, while 72 votes were declared invalid.

Giving the breakdown, Senator Mohammed revealed that the total number of delegates was 2,234, with 2,202 accredited while 2,020 voted.