Abraham Daniel said that Pastor Paul Eneche and other pastors were angry at him for leaving the church. 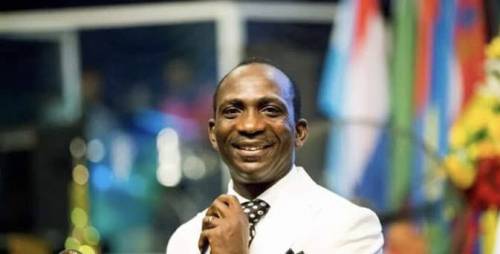 Pastor Abraham Daniel, a former member of Dunamis International Gospel Centre, has revealed how Pastor Paul Eneche, founder and Senior Pastor of the church, falsely accused him and had him imprisoned on trumped up charges.

Daniel said Eneche and other pastors were angry at him for leaving the church while also claiming that he (Daniel) publicly criticised Eneche in his Facebook posts that revealed the activities of the church.

Revealing his ordeal to SaharaReporters, Daniel said while he was in prison he lost his business while his wife also moved away with their five children on the influence of the church.

According to Daniel, after resigning from his position as a pastor, he was accused of embezzling the church's funds through a post sponsored by the church on Nairaland, a micro-blogging site and other news platform.

He was thereafter accused of posting about Eneche on Facebook, which led to his detention for three weeks at the Suleja Prison, Abuja.

"While I was there, we started a school. I wanted a school that would be almost free for church members but an instruction came from the headquarters that I should not run the school freely, so I had to stop the whole plan.

"I wrote on my Facebook post telling churches in Nigeria to encourage members' development and also help members.

"I also wrote that Christians now celebrate pastors instead of focusing on Jesus and the teachings of the Bible.

"I later lost interest in the church, wrote a letter of resignation, it was accepted and I left.

"The pastor (Eneche) called me and was insulting me because I left the church. He sent his pastors to start calling my wife to pester me to return to the church.

"This put my family in disarray as my wife pestered me until I closed the ministry and ensured I returned to Dunamis Church.

"A number called me that he needed my Uber service and we met unknowingly to me that they were police.

"They took me to Karu Police Station saying that they arrested me because of what I wrote against Pastor Eneche."

He added that he was moved to another police station in Abuja and the church insisted that he must be taken to court.

He was eventually charged to court and remanded in prison pending his bail application.

He also said that the church made false allegations while testifying in court, which made the judge send him to prison before he was granted another bail.

He added, "I was detained from Friday until Monday and when they noticed that the DPO of New Karu Police Station was not cooperating with them, they took me from there to Kubwa Area Command.

"They pressed the DPO to charge me to court, was remanded at Suleja Prison and after I was bailed, I went to beg him to withdraw the matter.

"Again, at another court hearing, they lied to the judge that I was still writing about the church and the judge ordered that I should be returned to prison. I spent three weeks at Suleja Prison before I was eventually released.

"While I was in prison, I lost my job and my family, and was released during the Coronavirus lockdown with nothing to fend for myself."

He stated that the church was bent on having him sentenced by the court for daring to leave Dunamis Centre and starting his own church.

He urged the court to strike out the case, saying it was baseless and premised on false allegations against his person.

The church refused to comment on the matter when contacted by SaharaReporters.

Head of Administrative (Central), Mr Victor Stephen, said the church would not make any comment unless an handwritten letter was sent to its headquarters in Abuja.