It was a theatre of the absurd at the National Assembly as Festus Keyamo exchanged hot words with Senators over the NDE recruitment. 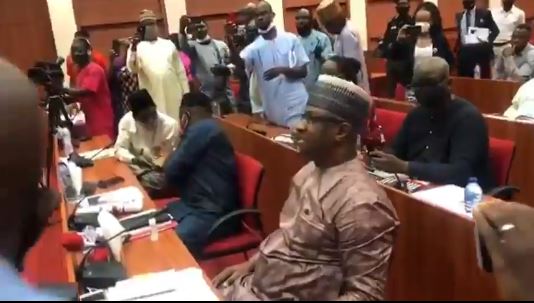 Festus Keyamo, Minister of State for Labour and Employment was quizzed by lawmakers over the National Directorate of Employment (NDE) recruitment today June 30, and was spotted in a video having a shouting match with them.

One of the lawmakers was heard telling the Minister that they want to ensure his efficiency and also make sure he is doing the right thing.

However when the lawmaker said that lawmakers also have the constitutional responsibilty of exposing corruption, Keyamo fired back by saying "how can you expose corruption without the cameras".

Before Festus Keyamo was asked to leave, the lawmaker said repeatedly "this is not a place to grandstand".

This is coming after Festus Keyamo alleged that some politicians in the country are trying to blackmail him and also hijack recruitment into federal government's Special Public Works (SPW) Programme.

with Lawmakers over National Directorate of Employment recruitment