The two bodies were discovered hanging from the roof of the house in their bedroom. 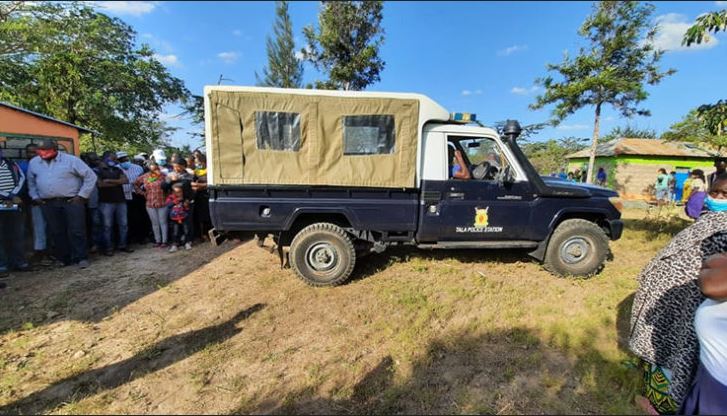 Police remove bodies of two lovers whose bodies were found hanging from the roof of the two-bedroom house in Matungulu, Machakos

A cloud of mourning has swept over Kaumoni village in Matungulu, Machakos County, Kenya after bodies of two lovers were found hanging side by side just days after eloping from the capital city.

Eyewitnesses said that the duo has been living together in Nairobi’s Kayole estate and arrived at their rural home on Friday after travel restrictions from the capital were lifted by the President.

The bodies have been identified as that of 28-year-old Dennis Pius and his 19-year-old lover Susan Ndeto.

Susan’s mother said that she went on a frantic search of her daughter after several calls went unanswered on Sunday morning, July 12.

She travelled from Nairobi to the village where her worst fears were confirmed when she found the two bodies hanging from the roof of the house in their bedroom.

The motive for the suspected suicide is unknown. The couple, according to neighbours, were seen chatting happily only to go mute inside their two-room house at about 1 pm.

However, teenager’s mother said the two had eloped from Kayole.

The mother said she had been warning the girl against the relationship with the much older man.

The Sunday incident, which took place about 2 pm, was confirmed by assistant chief Ruth Mwende Ngungu.

The bizarre incidence comes barely six months after another couple was found dead inside their house in Nguluni location.

The Nguluni man took his life moments after killing his love.