The pastor reportedly lured the victim to his room and had unlawful carnal knowledge of her. 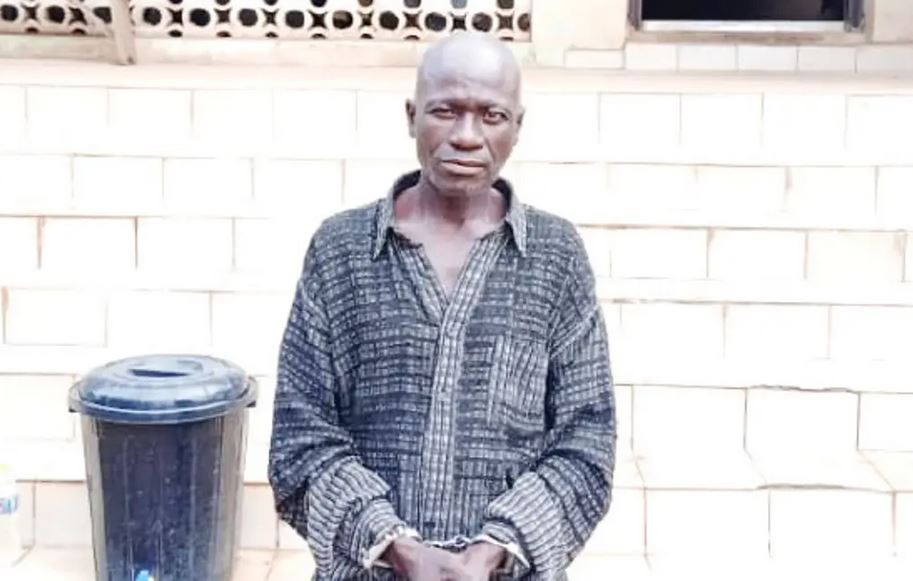 Oketokun Abiodun, a 59-year-old pastor of Light Christian Church in the Odeda Local Government Area of Ogun State, has been arrested by men of the Ogun State Police Command for allegedly defiling a 10-year-old girl, The PUNCH reports.

The pastor reportedly lured the victim to his room and had unlawful carnal knowledge of her.

The state Police Public Relations Officer, Abimbola Oyeyemi, in a statement, said the suspect was arrested on Saturday.

He said, “The pastor was arrested following a report by the father of the victim, who reported at the Odeda Police Station.

“The complainant said the pastor saw his daughter playing with other children and called her to go and bring a key for him in his room.

“While the innocent girl was going into the room, the pastor followed her, pushed her to the bed, covered her mouth with his hands and forcefully had carnal knowledge of her.

“Upon the report, the DPO Odeda division, CSP Ajayi Williams, detailed his detectives to the scene where the randy pastor was promptly arrested.”

According to the police spokesman, the pastor confessed to the crime during interrogation and was subsequently detained.

He added that the victim was taken to the General Hospital, Odeda, for medical attention.

Oyeyemi said the state Commissioner of Police, Kenneth Ebrimson, had ordered the transfer of the suspect to the Anti-Human Trafficking and Child Labour Unit of the State Criminal Investigation and Intelligence Department for further investigation and prosecution.

In a related development, a teenager, Abraham Adeleke, was remanded in police custody on Tuesday by an Osun State Magistrates’ Court sitting in Ile Ife for alleged rape of a 14-year-old girl.

The defendant was arraigned on two counts bordering on rape and assault.

The prosecutor, Joseph Adebayo, while addressing the court, explained that 19-year-old Abraham committed the offence on June 29, 2020, at Stadium Road, Ile Ife.

According to him, the offences are contrary to and punishable under Section 31(1)(2) of the Child Rights Law of Osun State, 2007 and Section 360 of the Criminal Code Laws of Osun, 2002.

Counsel for the defendant, Babawale Omodogbe, applied for his bail with an assurance that Abraham would produce reliable sureties.

The Presiding Magistrate, A.A. Ayeni, directed the prosecutor to duplicate the case file and send to the Directorate of Public Prosecutions for legal advice.

Ayeni ordered that the defendant be remanded in the custody of the State Criminal Investigation and Intelligence Department pending the consideration of his application for bail.

He adjourned the matter till August 11 for mention.

The police prosecutor, Inspector Oriyomi Akinwale, told the court that the defendant allegedly committed the offence on June 7 in Ire Ekiti, in the Oye council area of the state.

Akinwale said, “The defendant went to the house of the victim at Ire Ekiti and raped her there.”

The prosecutor urged the court to remand him in the correctional centre pending legal advice from the DPP.

The Chief Magistrate, Mrs Olanike Adegoke, ordered that the defendant be remanded in a correctional facility pending legal advice.

She adjourned the case till August 3 for mention.