A man of God who specializes in kidnapping people to raise money for charity has been arrested. 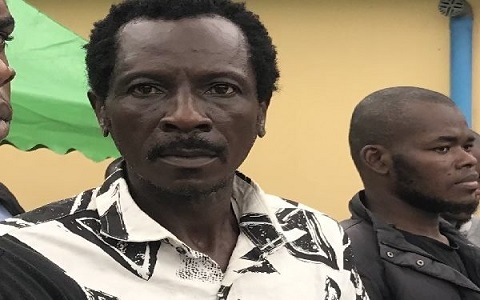 Pastor Adetokunbo Adenopo
Men of the Ogun state police command have apprehended a pastor, Adetokunbo Adenopo for allegedly abducting a delivery man, Jonathan Ekpo, in order to obtain ransom from his employers for Sallah celebration.
The 52-year-old who is the founder of the New Life Church, Sagamu, Ogun State, allegedly carried out the act with his gang members, Chigozie William, 22; Linus Ugorji, 30; and Emmanuel Chris.
Ekpo had gone to deliver a package to Adenopo in Sagamu when the four men tied him up and anaesthetised him. They also kept him in an underground room until he was rescued by the police.
Narrating his ordeal to journalists during the parade of the suspects in Abuja on Wednesday, Ekpo explained that he was placing the package on the table at Adenopo’s church when the men grabbed and wrestled him to the ground.
He stated that he struggled to escape, but was injected with a substance by Adenopo, which made him lose consciousness.
“When I regained consciousness, I found my hands tied and my mouth and eyes covered up. They later removed the gag in my mouth and the mask on my face; they fed me with beans, garri and fufu so that I won’t have to go to the toilet,” the victim narrated.
Explaining his role in the abduction, William said the pastor suggested the idea of obtaining ransom to fund his charity activities, adding that Adenopo promised to release Ekpo if his employers failed to meet their demands.
He stated, “The pastor invited the man to deliver some products. He said he wanted to collect money from his company to buy bags of rice and other things for the Sallah.
“I asked him how long would the man stay with us and he said after this month, if there was no money (ransom), he would release the man. When the man came, we took him down and the pastor injected him. We took him to the underground. We used to feed the man every morning and night; that was the pastor’s instruction.”
Adenopo, who claimed to be a former pastor with the Living Faith Church, said he planned to use the ransom from the failed abduction to buy rams, rice and garri, which he intended to share to the poor in his community.
On his relationship with his accomplices, he said they were staying with him for security reasons, adding that he designed the underground room where the victim was kept “for certain situations and threats.”
The pastor, who appeared unperturbed by his arrest said, “A few weeks ago, we were short of funds and the idea of doing something during the Ileya (Sallah) came up because I don’t discriminate against any religion, so we planned to get some bags of beans, garri and ram and share to people.
“That was why we came up with the idea of getting money from rich companies and use it to buy those items to start the project.”
Top Stories