It was gathered that Chidi and Chima were returning from work and their danfo had stopped briefly to discharge some passengers when the tragedy struck. 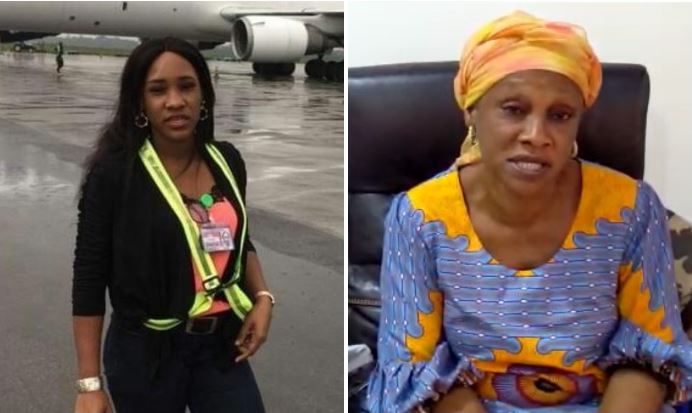 The late Chidinma and her mother

According to a report by The PUNCH, a resident of Lagos State simply identified as Mrs Ajoku has decried the activities of container-laden trucks in the state, calling on the authorities to check their operations and put in place necessary regulations to secure the lives of road users.

Ajoku’s plea was contained in an emotional video obtained by The PUNCH on Friday.

In the five minutes and 13 seconds video, the widow narrated how her 27-year-old daughter was killed by a reckless trailer driver on Sunday in the Isolo area of the state.

The PUNCH had earlier reported that Chidinma Ajoku and her colleague, Chima Nnaekpe, 29, m, who both worked in the Commercial Department, Hajj & Cargo Terminal, at the Federal Airports Authority of Nigeria, died when a truck, with number plate, SGM 715 XA, loaded with a 20ft container, fell on a commercial bus they were on at the bus stop.

It was gathered that Chidi and Chima were returning from work and their danfo had stopped briefly to discharge some passengers when the tragedy struck.

In the video, Chidi’s mother said, “I will like to report to the public what happened on Sunday evening. My daughter and her colleague, Chidinma Ajoku, who used to work at FAAN before her death, was returning from work, one Chima and they were on a commuter bus. I think the bus stopped to pick passengers or stopped to drop passengers. Then a reckless trailer driver that was carrying a container was speeding and fell on the bus.

“I waited and waited the whole night up till 2am in the night waiting for my daughter to come back from work. I was calling her aunty where she was staying in Surulere. Both of us did not sleep till around 6am when a colleague called and told me that she was involved in an accident and that they were at Isolo General Hospital.

“When we got to Isolo General Hospital, they were not among those people that were brought in there. They referred us to a general hospital in Yaba and we went there and they told us to check the morgue because they did not bring any living person there. My husband’s friends and son checked the morgue and saw my daughter and her colleague.

“I will like to tell the public that this is getting too much. These containers keep on killing people and nobody talks. My daughter was 27-year-old working with the Federal Airports Authority of Nigeria. She went to Babcock University and was planning to go abroad to do her masters. And this is just how life has been snuffed out of her.

“I want to use this medium to appeal to the authorities to bring these people to book. They will not just keep quiet and stop the life of a promising young girl like that and a promising young man like that. Let the government do something because it is getting too much, especially in this Lagos.

“If my daughter’s life is going to be used to stop this menace, then, let it be what I have achieved. I know that maybe they will say I am a nobody until somebody’s child is snuffed out before they do something. But I think everybody in this Lagos whether you own a car or enter public transport, all of us, our lives are in danger because we encounter all these trailers and containers every day and they are very reckless. Please, let something be done.”

Efforts to reach the General Manager, Public Affairs, FAAN, Henrietta Yakubu, proved abortive as of the time of filing this report but a source in the department, who preferred anonymity, confirmed the development to our correspondent.

According to the source, the remains of Chidi and Chima were yet to be buried but FAAN management had paid condolence visits to the two affected families.