At least 22 innocent persons have been brutally killed after gunmen invaded villages in Kaduna. 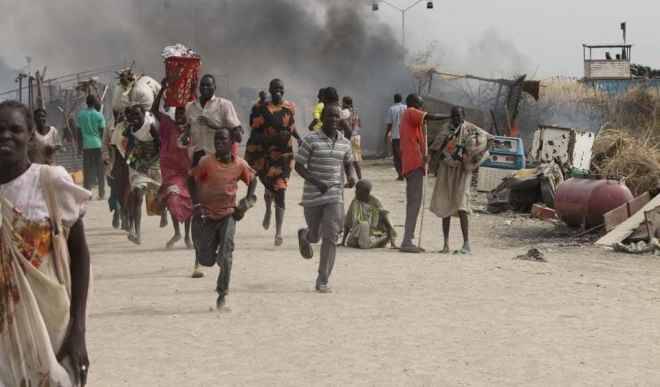 File photo
Fresh attacks on communities in four villages of Zangon Kataf Local Government Area of Kaduna State by have left 22 persons dead.
According to The Nation, the gunmen launched what sources described as coordinated attacks on Apyia’Shyim, A’Piako, Atak’Mawei, and Kibori villages, all in Atyap Chiefdom of Zangon Kataf.
Zango-Kataf is one of the recently troubled local government areas in the southern part of Kaduna State.
The situation had forced the state government to impose a 24-hour curfew since June 11.
A source todl TheNation that, the attackers operated unchallenged, having taken advantage of the all-night rain.
According to the source, “It rained all through the night in the area and the attackers had unchallenged operations from around 10 pm Wednesday which entered early hours of Thursday.
“By the time they were done, 22 corpses have so far recovered at about 12pm today (Thursday) while the search is still on. They also burnt several houses,” the source said.
A resident of Atak’mawei village in Zamandabo ward, Irimiya Gandu, said no fewer than 13 persons have been killed and many houses were burnt down in his community.
According to him, “around 1:00am, I was already asleep when I heard the sound of gunshots. I stepped out from our compound we could hear the sound of gunshots from Apia’akum Community and far Kibori village were already under attack. I rushed into my house and brought out my families and ran to a safer place.
“So far, 13 persons are killed mostly Children and women. We are still looking for more. Many houses were burnt also,” he said.
Also, a survivor from Apia’ahko village, Samson Alat said, an aged man, a little child and youth were killed when armed men invaded the village. “They burnt the house of late Col. Bobai and five important houses and stole from the village,” he said.
According to him, “soldiers came on motor bikes and an armoured tank, but they could not stop these wicked people. We were hiding inside maize farm and we saw them. This was around 1am last night. We are still looking for more missing people.”
A resident in Apiashyim, Jonathan Ishaya said six persons were killed during the attack in his community and the village almost entirely razed.
He said the armed men invaded the Community heavily armed at around 11:00pm of Wednesday, shooting sporadically.
Secretary, Atyap Traditional Council, Mr Stephen Akut, also confirmed the development to journalists that, “the attackers were said to be in large numbers and that the casualty figures are still sketchy. Security operatives have been mobilize to the affected communities.”
Chairman of Zango Kataf Local Government Area, Dr Elias Manza on his part, confirmed that three corpses were recovered in Kurmin Masara, six in Apyia Shyam (Asha a Wuce) and 10 in Takmawai where the destruction of property was massive.
Meanwhile, several calls put across to the Police Public Relations Officer for Kaduna State Police Command, ASP Muhammad Jalige, were not responded to as at the time of filing this report.
Top Stories