In a recent chat, Alaafin of Oyo's young queen, Anuoluwapo Adenike has revealed what made her marry the elderly monarch. 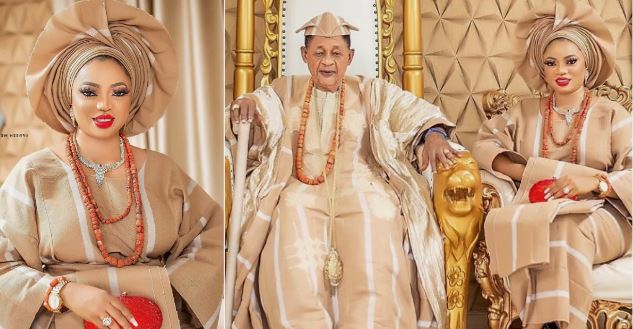 Queen Anuoluwapo Adenike and husband, Alaafin aof Oyo
Queen Anuoluwapo Adenike, one of the young queens of the Alaafin of Oyo, has revealed what it is like marrying the monarch despite the age gap.
She spoke in a chat with BBC.
The political science student said that she hears a lot on social media about being a young woman married to an elderly man with many wives.
According to her, she is contented and at peace with where she is and being a member of the Alaafin of Oyo's queens.
"What we hear on social media is a lot but what I will say is that the head does not know where the leg is going. One does not know what one's destiny is. You may have your plans and God has another and God's works are mysterious," she said.
The mother of two noted that a woman may marry a young man and he collapses and dies after some years. She also stated that another woman can also get married to a young man and they live long together.
According to her, everything depends on the grace of God, which she says that she received by marrying the Oyo monarch.
"I have the right to make any choice. I cannot lack a mother and not have a husband who will give me peace. I am at peace with where I am. The Alaafin of Oyo gives me everything I want. People just like to talk about a person who has the grace of God upon their lives," she said.
She added that she would like to tell people to make proper findings before they talk about others.
"I'm not saying people shouldn't talk but for me, I don't regret the decision of marrying the Alaafin because I have everything I want and God is helping me," she said.