How Fire Razed Down Marian Market, Destroying Property Worth Millions In Cross River


The inferno started at about 8:05pm on Wednesday, a few minutes after power was restored at Marian, the area where the market is located. 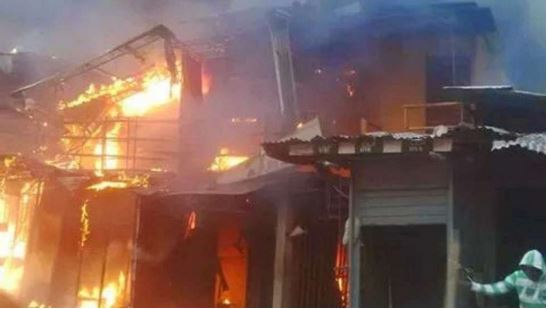 It was gathered that the inferno started at about 8:05pm on Wednesday, a few minutes after power was restored at Marian, the area where the market is located.

Though the cause of the fire outbreak was yet to be known, an eyewitness who gave his name as Mathias Okon said that it was like hell on earth to traders and shop owners.

“The plantain, food and grocery lines adjacent the Young Shall Grow Motor Park along Ika Ika Oqua (Market) Road was seen with heavy flame of fire lighting up the entire area.

“Many traders have tried their best to save their goods and shops but to no avail. Only a few have been able to smuggle the little they can from the fire as it continues to ravage the market,” a witness said.

Also speaking, a victim of the fire who was crying said “What am I living for? All I have is in the fire. I just received a call that the market is on fire and before I got here, I saw my shop burning, I can’t even go in. The money from my sales today is in the market, my life savings is in the market. I am finished.”

But another victim, who claimed to be a lucky trader said: “When I received the call, I took a taxi and rushed to the market. I saw the fire burning behind our shop, so I had to call my siblings to help me out, we’ve been able to smuggle our goods out before the fire got to our shop”.

Some who also succeeded in removing their goods from the market, ended up losing them to thieves in the process as the market is crowded with so many people.

Many who spoke under anonymity lamented the lack of adequate Fire Service in the state, as their efforts to call for help proved abortive and only shop owners and good Samaritans were battling with the fire.

At the time of filing this report, at about two hours after, there was no presence of Fire Service in the market and those who called 112 Emergency number were told to hold on as a dispatch team was on their way.