Teenage Nigerian comedians, Ikorodu Bois have gone from grace to grace after receiving another equipment worth several millions. 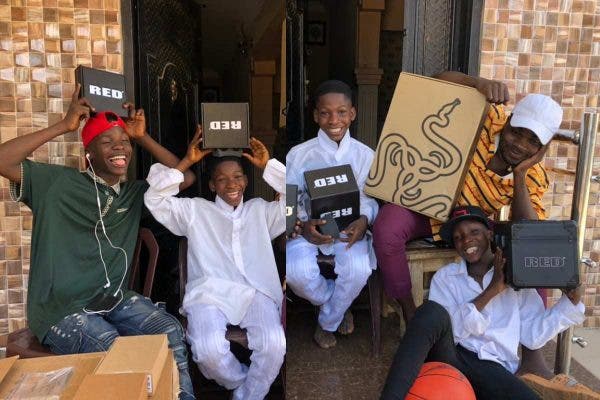 Ikorodu Bois show off their latest equipment
Popular Nigerian teen comedians, Ikorodu Bois are jubilating once again after RED Digital Cinema and Razer gifted them some filming equipment worth millions after their remake of the Money Heist trailer.
Recall that since the making of the viral Money Heist trailer by the group, they have gotten loads of international recognition.
In a recent post on social media, they revealed that RED Digital Cinema and Razer have given them a surprise gift.
From the look of things, RED gave them some high grade cameras while Razer gifted them a gaming laptop.
Sharing a snap of the gift, they wrote;
Whattt!! RED!!? you guys are the best! Thank youuuuu @RED_Cinema
Thank you Razer!!🙌🏾🙌🏾🙌🏾
@Razer its totally outstanding
Recall that the they were also recently invited to the United States by Russo Brothers, co-producers of American action-thriller film, Extraction 2 after they posted a trailer remake of the movie on Twitter.
Netfix also recently gifted the popular Nigerian teen comedians, Ikorodu Bois, some hi-tech filming equipments worth millions after their remake of the Money Heist trailer.
Taking to their social media page to appreciate Netflix for the gift, they wrote;
“Netflix!!!! Thank youuuu!! @netflixfilm you guys are amazing, we’ve received the gift, we love it!…
Sir @kunleafo we would love to say a very big thank you as you received us with open arms and for also giving us the opportunity to better our crafts and for also deciding to be a Mentor to us, and for the scholarship program as well, we want you to know how much we appreciate this sir, you are a father and we are ready for the father-children tutelage from you sir. “We look forward to having you as a pillar and uplifting hand in our endeavour and growth.