Policemen Burnt Their Vehicle To Frame Us - Islamic Movement In Nigeria Says, Calls For Probe


IMN accused the police in Kaduna of attacking a group of its members without provocation and was seen setting their vehicle on fire. 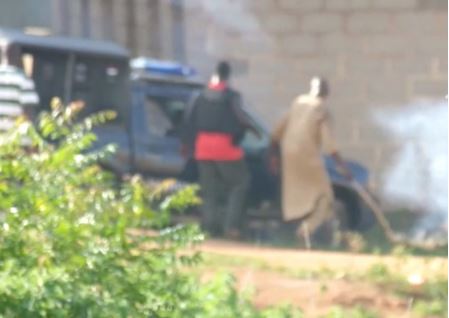 The Islamic Movement in Nigeria has called on the Inspector-General of Police, Mohammed Adamu, to investigate the alleged setting on fire of a police operational vehicle on Saturday in Kaduna.

The group in a petition written to the IGP and signed by President of the Movement’s Media Forum, Ibrahim Musa, called on Adamu to set up an investigative panel with a view to unravelling circumstances leading to the setting on fire of a Kaduna police command vehicle.

IMN accused the police in Kaduna of attacking a group of its members without provocation and was seen setting their vehicle on fire.

The group also claimed scores escaped with varying degrees of injuries from police bullets with several cars belonging to the mourners vandalised and houses torched by policemen.

Musa said, “Policemen were caught on camera setting their own operational vehicle ablaze shortly after they opened fire on the Ashura mourners, killing three people and wounding dozens of others. Many other vehicles belonging to members of the Islamic Movement were also vandalized by the rampaging policemen, who also set houses ablaze and made a number of arrests.”

“It was not immediately clear why policemen would deliberately set their own vehicle on fire but it might not be unconnected with their attempts at framing up members of the Islamic Movement, who were solemnly mourning the brutal murder of the grandson of Prophet Muhammad as is done in many parts of the Islamic world each year during this period.”