Osinbajo Tells Pastors How To Deal With The Controversial CAMA Law


Yemi Osinbajo, the vice president of Nigerian has reacted to the controversial CAMA law. 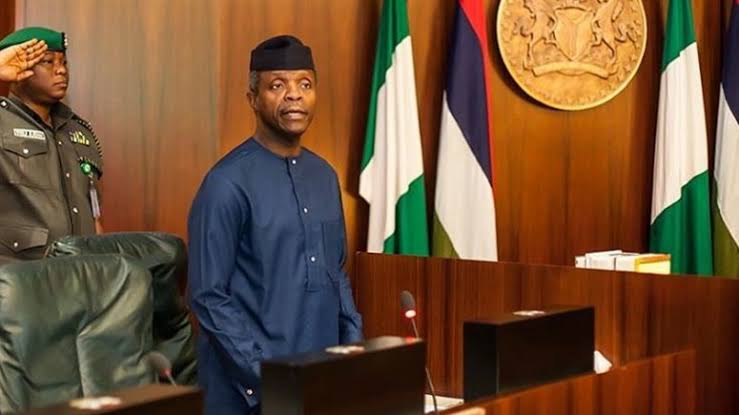 Yemi Osinbajo
Nigeria's Vice President has asked religious leaders who are not happy with the controversial Companies and Allied Matters Act (CAMA) 2020 law to approach the national assembly for ammendment.
He made this known in a press statement.
Read below:
OFFICE OF THE VICE PRESIDENT
PRESS RELEASE
OSINBAJO TO CHURCH LEADERS:
CONCERNS ABOUT CAMA CAN BE ADDRESSED THROUGH AMMENDMENT BY NATIONAL ASSEMBLY
*VP adds: “We are in a democracy, there is a process by which things can be done”
In an effort to allay fears expressed by the leadership of the Church about the recently enacted Companies and Allied Matters Act (CAMA) 2020, Vice President Yemi Osinbajo, SAN has said concerns can be processed through possible amendment of the contentious section of the law through a proposal to the National Assembly.
The Vice President stated this on Thursday during a special conversation at the ongoing Nigerian Bar Association (NBA) Annual General Conference.
Responding to a question about reactions to CAMA, the Vice President said “what can be done is that, whatever the proposal for amendment may be, whatever the views of the leadership of the church may be, regarding the question of how the trustees, whether they are interim trustees or not, can be put in the form of a proposal that will be taken to the National Assembly for consideration for amendment to the law, that is the process which is entirely opened and ought to be pursued.”
Continuing, Prof. Osinbajo said “we are in a democracy and there is a process by which things can be done and that process is the one where you bring forward amendments to the National Assembly and they will do whatever is considered useful in the circumstance.”
Further clarifying the CAMA law, the Vice President said “it is a massive legislation that covers a wide range of issues on companies - general meetings, appointment of directors etc. Now, there is a small portion of it called the Incorporated Trustees Section, that small section of it is the section that regulates charities.
“Churches, Mosques and church organizations are regarded as charities. It is the Incorporated Trustees Section of the Companies and Allied Matters Act that has become controversial. And because churches are charities, the provisions in the incorporated trustees section obviously affect the churches.”
Speaking about the fears expressed by the Church, the Vice President said “what the Churches are concerned about is a provision that says that in the event that some wrong-doing is found to be perpetrated by the trustees of the particular organization or Church, the Registrar-General of the Corporate Affairs Commission (CAC) can go to court and get an order to appoint interim administrators or interim trustees for the Church or whichever charity organization and manage the organization.”
“The concern of the Churches is that it could lead to a situation where practically anybody could be appointed as a trustee to oversee the Church and a Church or a Mosque is a spiritual organization and if you do not share the same faith with the Church or Mosque, you may be the wrong person and if a wrong is appointed, you may create more trouble for the organization,” the Vice President added.
When asked by the moderator (Nduka Ogbeibena) if pastors are, by their actions, unwilling to be accountable in the management of their organizations, the Vice President said the issue is rather the fear of abuse of the law than avoiding accountability.
According to Prof. Osinbajo, “As a general position, I do not think it will be right to say that pastors don’t want to be accountable. I believe that several Christian organizations and pastors are willing to be accountable. The problems that they may have is ensuring that processes are not abused in such a way as to compromise the entire organization. And I think that if all that is required is some process of accountability, I think it will be easier for organizations to accept that.”
Laolu Akande
Senior Special Assistant to the President on Media & Publicity
Office of the Vice President
27th August 2020
Top Stories