How I Jumped Out Of My Burning Car, Escaped Death - Broadcaster Whose Vehicle Caught Fire On Expressway


A broadcaster, whose car was engulfed in flames along the Lagos–Ibadan Expressway has talked about the incident. 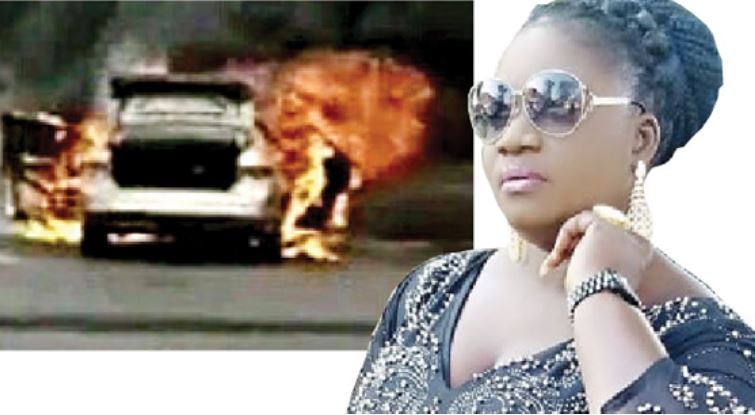 Mrs Olayemi Ajide-Olayinka, an independent broadcaster, whose car was engulfed in flames on Thursday, August 27, 2020, along the Lagos–Ibadan Expressway and caused a gridlock, shares her experience with ABIODUN NEJO

When you woke up on Thursday morning, did you have any funny feeling about how the day would go?

When I woke up in the morning, I did not feel anything unusal. I had an appointment with my doctor which I had to keep. I left my house at about 6:30 in the morning because of the traffic on our road. My appointment was for 8am. So, I wanted to get there before then. I was even the one that gave my younger brother a ride to his workshop around Agidingbi, Ikeja. The appointment was at Allen Avenue. I was there until about 11:30am. On my way out, I waited for somebody around Alade Market, Ikeja, where a lady was to give me something. When she came, we sat in the Honda car and discussed for some time before I dropped her off.

What took you to the Lagos–Ibadan Expressway where the fire incident occurred?

I was on my way home, but when I got to Marwa Garden, I decided to call a sister at Arepo that I felt like eating pounded yam and she asked me to come over that she would prepare it for me. She asked me to stop over at her shop around there. When I was at Under Bridge, my sister-in-law, my husband’s immediate elder sister, called me on the phone. When I got to Berger, my son called to inform me that I should buy some things when coming home and I told him that I was already on my way home. I was just moving along the Long Bridge when, all of a sudden, I just saw thick smoke coming out of the air condition vents. I wondered what could have happened. I wanted to turn off the air condition. I was looking at the dashboard in order to turn it off, but before I could lift my head, I saw flames of fire coming out of the bonnet. I was confused about what to do. I was not on high speed anyway, so I wanted to apply the brake so that I would be able to manouvre the car and park. However, the brake did not work, it was flat. I was dazed. Ahead of me was a truck and the fire was burning through the bonnet. The truck was there, the brake was flat and I didn’t want to ram into the truck because of the fire. I knew that if that happened, that would have been the end.

How did you handle the situation?

With the situation, I had to think of what to do. I found myself struggling with the steering and the brake, nothing was happening. Before I knew it, the fire engulfed the door. There was smoke everywhere, even inside the car. It just occurred to me that if it continued, the door would have been shut. But the car kept moving, so I had to force the door open and therefore jumped out. You needed to see me, I was like the movie star, Jackie Chan. The car was moving, so I jumped down and was rolling on the road. I was conscious of my legs, I did not want the fire to burn me. It was after some seconds when I jumped off the car that it stopped in the middle of the road as it continued to burn.

Did you receive help?

Other motorists came to my rescue immediately with their fire extinguishers. In short, with the response I got, I know that there are still some good people in Nigeria. They tried for me. Maybe because a woman was involved, everybody started parking and trying to help. Unfortunately, the fire extinguishers did not yield any positive result. As they were applying them, the fire was spreading further. But I just sat down and I watched the car completely burnt.

What was going on in your mind at that time?

At first, I did not even know what to think about!  Was it my son who called me about five minutes earlier?  What would he have said if the unexpected had happened? Would that have been the last time I would have heard his voice? Would that have been the last time he would have spoken to me? I was lost in thought. It took about 30 minutes before I could get myself together and call my husband, brother, my friends and others.

Did you sustain any injury when you jumped off the car?

No. It was after everything when I was returning home that I felt some pains in my neck, wrist, legs and nails. but before then, it was as if nothing happened to me. I did not feel anything while there. Everything was blank. I was in shock! Terrible shock! I could not believe that the charred remain was the car that I brought out in good condition in the morning. It was not a good experience at all. However, I thank God.

Did you sight officers of the Federal Road Safety Corps, Nigeria Police or fire service?

It was about 20 minutes or thereabouts , when the accident happened, that I saw some policemen, about five of them in a police van at the other side of the road. They were just looking, maybe it was not their jurisdiction. It was later that men of the Ogun State Traffic Compliance and Enforcement Corps came. We were just watching the fire raging. Although they wanted to push the car to a side of the road, nothing could be done with the fire raging. Later, a policewoman and a male officer came. She took my number, but men of the fire service and FRSC were not at the scene.

What do you think was responsible for the fire?

Honestly, I don’t know. I checked everywhere. It was not as if fuel leaked. Everywhere was dry, I would not know what led to it. The car did not give any sign, it was the car that I took to Faaji FM for my radio programme at Alagbado two days earlier. I live at Magboro. It was just on Wednesday August 26, 2020, that I did not go out. When I took the car out on Thursday morning, there was no sign at all that anything would happen. Some people said maybe the battery touched something, but I do not understand that explanation. Some said maybe the fuel was leaking inside the bonnet. Some said it might have been an electrical problem, but I can’t say. I have not used the vehicle for about two weeks. It’s only my son who took it out to buy fuel and other things in our area. Whatever the problem might be, I don’t think it can just catch fire at once like that. I don’t know what could have happened.

What did you lose along with the car?

I would say just the car and some of my personal things. I am just trying to put myself together to really know what I lost.

What will you attribute your safe escape to?

It is God. Honesty, I do not not know from where the courage with which I jumped out of the car came. It was God, I must confess.

When you recall what happened and how it happened, what comes to your mind?

Every minute you’ve got to live in this world, just thank God for life. It (incident) has taught me that everything in life is ephemeral. You don’t know what can happen to you next minute.