Men of the area are worried about the scarcity, not because they are the ones burdened with the responsibility of fetching water, but because their wives who do that have become tired, abandoning their marriages and returning to their fathers’ houses. 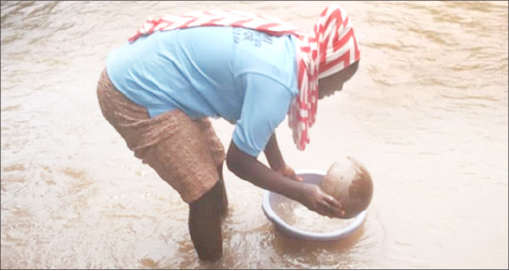 For Ijabisa, a community in Bwari Area Council of the Federal Capital Territory (FCT), lack of water is a perennial problem. Water scarcity has been the major challenge of the community since the inhabitants’ forebears settled there over a century ago.

Men of the area are worried about the scarcity, not because they are the ones burdened with the responsibility of fetching water, but because their wives who do that have become tired, abandoning their marriages and returning to their fathers’ houses.

The chief of the community, Dauda Husseini, narrated that: “It happened to me. My wife could not handle the rigorous stress of fetching water every day. One day, she packed her things and went back to her father’s house. If I hadn’t been following this one that I am married to, bumper-to-bumper, she would have gone too. I will not blame her because, who wants to suffer?”

The sources of water for the community are streams flowing through valleys. The water is said to be unhealthy for consumption, and the women have to wake up before cockcrow to fetch it.

The better part of their morning is spent fetching water. The case is complicated during the dry season when they have to go far in search of water, as the streams usually dry up: “The women we have now are ‘agric women’. They cannot do hard work. They do little and get tired. When our young men approach them and they come down here and see what we are passing through, they decide to just quit the relationship.

“I have tried to get some loans so that we could dig a borehole here. I was told that I would need over N600,000 for the job. The topography of this area is such that you would have to dig very deep before you can get water. The wells we dig always dry up. It is a big challenge for us.”

He said the consumption of the brown water has made his people constantly sick with diarrhoea, cholera and typhoid: “As I am talking to you, my mother is on drip. Three of my children are sick. One of them, after being treated here, was referred to a hospital in Kaduna State. Many of the people in my community complain of this same thing. We are really in a difficult situation.”

He added that the increase in population and climate change make the situation worse during the dry season when streams vanish, compelling the people to head to farther streams in search of water: “Those with energy and patience could trek to Zhiko, a neighbouring community, to get drinking water from the borehole donated to them by a non-governmental organisation. The borehole being powered by solar energy is being overused, owing to the huge population that depends on it for water.”

He said his sad experiences with women over lack of water prompted him to always assist his wife in fetching water, usually before going to work: “I really do not want my wife to leave me. She has to wake up early in the morning to fetch water and prepare the children for school. The water fetching takes a whole lot of time.

“What I do sometimes is to use my bike to get the water. I tie the jerry cans to the bike. It helps us a lot.”

He explained that beside the fact that he did not want his wife to suffer, his religion, Islam, admonishes men to provide for their wives. Musa, a driver with an organisation in the city centre, said, however, he gets into trouble sometimes helping his wife as he arrives late for work at times: “We have written several letters to Bwari Area Council about the issue and nothing has been done yet to help the situation. They only come to us when they need our votes during elections. They gave us salt and seasoning. They promised us heaven and earth but never fulfilled any.

“All the interventions we have been getting are from NGOs. The only remarkable thing I can say the government did for us was the renovation of our primary school. But, for water, we have always been on our own, and we need urgent help.”

Another native, Mama Amina, 56, narrated her experience in her 30 years of marriage. She spoke through an interpreter: “I always have pain all over my body. My neck and hands are always weak after I finish fetching water. I buy analgesic drug all the time after fetching water.

“I used to go like seven times to fill my drum (container). Even now that I have grandchildren, I still fetch, unless my grandchildren are here to help. If they are not, I do the fetching. It is just the love I have for my husband that keeps me in the village amid the water challenge.”

For 18-year-old Halira Husseini, life in the community is exhausting with the elusive quest for water. A Junior Secondary School student, she would love to finish up her school and marry outside her village because “the suffering is too much.”

“I wake up early in the morning around 4 to fetch water so that I can meet up with school. I attend school in Niger State because there is no secondary school around here. No matter how early I wake up, I still end up going late to school and getting punished for it. It is exhausting.”

Ijabisa community is not alone in this hellish situation. Its neighbouring communities, Zhiko, Paspa and Goyipe have similar tales to tell. Apart from water problem, the roads to the communities through Kubwa and Bwari are in bad shape. These had made it difficult for the people to take their farm produce to the markets in Kubwa and Bwari. The villagers, who are predominantly farmers, often speak of bountiful harvest of guinea corn, millet, yam, soya beans, cassava and groundnut.   Another challenge is the lack of proper healthcare services. The Chief of Zhiko, Bulus Wakili, stated that the clinic that the four communities are managing is dilapidated with no facilities or staff:

“The only staff we have, a nurse, decided to go back to school. The other person who manages to come is based in Niger State. When we fall sick at night, we are on our own. It is only God who will help us.

That was how we lost Thomas’s pregnant wife and our youth leader.”

He said the cases of the youth leader, Solomon Zaka, and the pregnant woman, were similar. Both fell ill in the night and were unable to promptly get to hospital in Kubwa due to the poor road and long distance between:

“Some missionaries like the Daughters of Charity Congregation, had opened a clinic in the locality. But the bad road to the village hindered them from continuing with the health services they were rendering to the community.

“One day, I and the Chief of Ijabisa had gone to Kubwa to get some drugs and we were accosted by thieves. They beat the hell out of us. That is what we are facing.”

The Waziri of Paspa, Muhammed Gyanyi Paspa, said apart from the lack of potable water and inaccessible roads, the communities were in dire need of a secondary school. He lamented that many of their children have become dropouts due to the distance they trek daily to school:

“The four communities agreed to allocate a large plot of land to the secondary school project. We informed the area council and the delegation from the council came to see the land. Yet, nothing has so far been said about the school project.

“We got two hectares of land. We have even spoken with the owners of the land and they said we would give them N1.5m settlement. We really need this school to encourage our children to further their education. They always ask ‘if we finish primary school, what next?’ It is really troubling for us.”