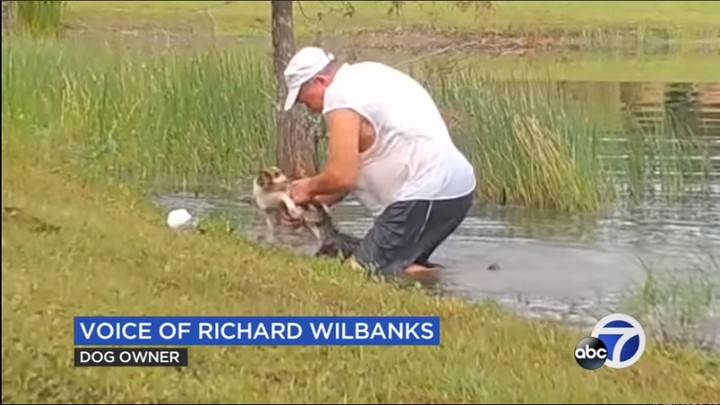 The man fought the alligator to save his puppy
A man has become a global hero after jumping into a river to fight with an alligator about to devour his puppy.
Footage shows the man wrestling with the alligator with his bare hands to save his puppy that was seized by the predatory reptile and dragged underwater in Florida, US
Richard Wilbanks, from Florida, US, was caught on video leaping into shallow water and fighting off the huge predator to save his poor dog.
In the amazing clip, the man wades into the river and pulls out the alligator, which has the squealing puppy, called Gunner, trapped in its jaws.
Roaring in what sounds like agony, he prises open the animal's mouth and frees his dog which, amazingly, is able to run off to safety without appearing to be seriously injured.
The clip, shared by Florida Wildlife Federation and F Stop Foundation, ends with Richard still standing in the water, grappling with the alligator. 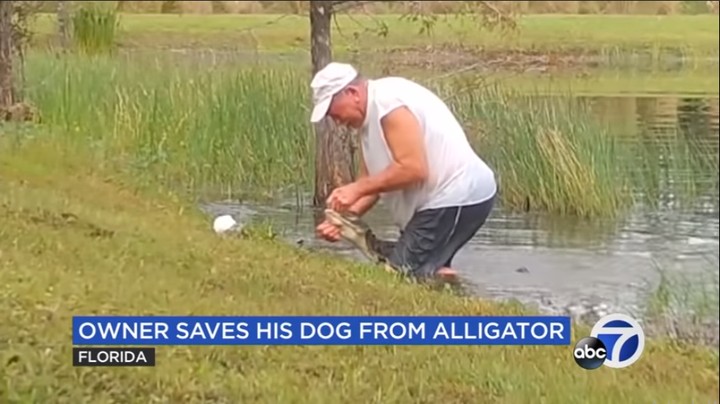 Explaining the dramatic incident, he told CNN: "We were just out walking by the pond and it came out of the water like a missile.
"I never thought an alligator could be that fast. It was so quick."
Gunner the pup suffered puncture wounds in the attack but thankfully survived the ordeal.
Richard said he thought nothing of his own safety, saying his dogs are like his "children" and he would risk anything for them.
"He had one little puncture wound, and my hands were just chewed up," he said.
Richard and his wife, Louise Wilbanks, now walk Gunner on a leash at least 10ft away from the water and said they do not want the alligator to be destroyed, as it was just behaving like a wild animal in its natural habitat.
Watch video below:
Top Stories