A Nollywood actress has shared a video twerking for her husband with her fans. 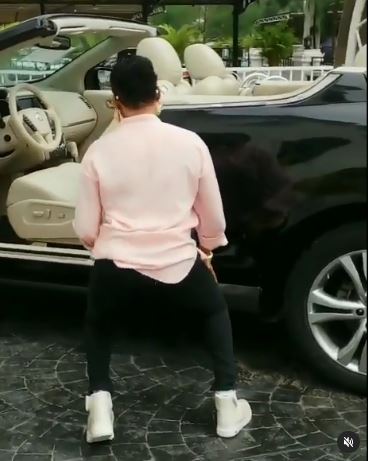 Lizzy twerking while husband watched
A Nollywood actress has left fans wondering after a video of her twerking while her husband watched in awe surfaced online.
Actress Lizzy Anjorin in the video, showed off her twerking skills.
Her husband Lateef Lawal stared in awe as he stood behind his car, loving the happy mood of the controversial actress.
Lizzy was dressed in black jeans with a pink expensive top and a white kick.
She has been very happy for being able to sell the million Naira Nissan Murano convertible in her husband’s garage.
Recently, she was in the news after her fans accused her of being pregnant.
These allegations made her mad at her followers leading her to reveal she had done nothing to conceive.
According to her, she has not been intimate with her husband since marriage.
Considering how false rumors were spreading about her, she asked her fans to apologize before she chats with them.
Watch the video below: