A fisherman has been left perplexed after discovering that the octopus he captured for dinner has 9 legs. 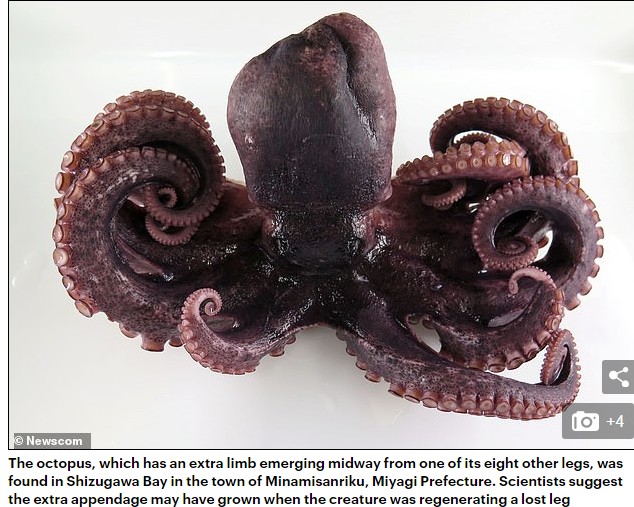 The octopus was discovered to have a rare 9 legs
An octopus with 9 legs has been discovered by a fisherman in Japan as he prepared the animal for dinner.
According to Dailymail, the octopus, which has an extra limb emerging midway from one of its eight other legs, was found in Shizugawa Bay in the town of Minamisanriku, Miyagi Prefecture.
Scientists suggest the extra appendage may have grown when the creature was regenerating a lost leg.
Although the octopus did not make it out alive, it is set to be showcased at the Shizugawa Nature Center for the public to view.
The reddish colored octopus measures a little more than 15 centimeters long and was one among four caught in a trap by Kazuya Sato, who cultivates wakame seaweed in the town.
Sato took the catch home to his mother, who noticed something strange when placing them in a boiling pot of water – one of them had an extra leg.
The nine-legged octopus has an extra limb on the middle of the third leg on its left side.
Takuzo Abe, a researcher at Minamisanriku Nature Center, told The Mainichi: ‘(This octopus) is a phenomenon demonstrating the diversity of nature.’
‘I hope it becomes an opportunity for people to learn about the abundant mysteries of the ocean.’
Abe suggests that the legged formed during the regeneration process of another leg that was cut off.
Another rare octopus was discovered in September on an island in Washington State’s Puget Sound – but this one had seven legs.
An outdoorsman said he came across the unusual sea creature on Whidbey Beach early on the morning of August 29, when the tide was still out.
He submitted photos of it to a local wildlife organization, who passed them along to marine life centers, who identified it likely as a seven-legged octopus.
Known formally as Haliphron atlanticus, the scarlet cephalopod actually has a full eight arms but one is hidden except during mating.
Elaina Jorgensen, a marine biologist at NOAA, said she has seen photos of Haliphron from off the coast of British Columbia.
'It's possible this animal was blown into Puget Sound during the wind storm last week and died from our low salinity waters.'
Regardless, Jorgensen said, the cephalopod looked like it was in relatively good condition.
Despite its popular name, the Haliphron does have eight tentacles.
Males appear to only have seven but an additional one, called a hectocotylus, is tucked inside a sac near its eye and is used to help fertilize females.
The arm easily can be missed because of the octopus' thick skin.
'That's why there is a reluctance among cephalopod researchers to refer to this species as 'the seven-armed octopus,' said Jorgensen.
Top Stories