Luck has finally ran out on some notorious armed robbers hiding in Calabar after they were arrested by security operatives. 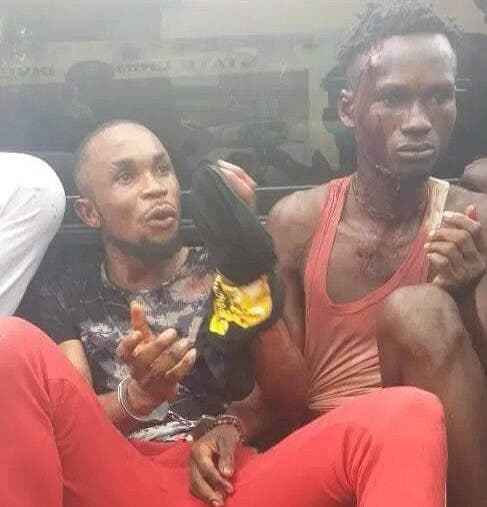 The robbers after they were arrested
A notorious gang of armed robbers on the wanted list of security agents have been apprehended in Calabar.
According to Vanguard, the lead suspect whose name is given as Sly Obo was arrested at the Calabar Bayside by a security team led by Mr Leo Inyambe, the Security Adviser to Governor Ben Ayade.
Inyambe said Sly and one of his members were arrested after a manhunt for them and in collaboration with residents of the Bayside Community who provided information on their activities and whereabout.
“A joint operation by my team with residents of Bayside Neighbourhood Security Services led to the arrest of a notorious armed robber and one of his accomplices”.
He said the suspect and his gang have carried out many armed robbery and kidnap operations in the state recently and was a thorn in the flesh of people in Calabar South.
He said the arrested armed robbery suspects has been handed over to the police.
Meanwhile, Mr Christian Ita, Chief Press Secretary to Governor Ben Ayade, in a statement said over three hundred criminals have been arrested in the past two weeks with the launch of Operation Akpakwu.
“During the launch of Operation Akpakwu , Governor Ayade handed over one hundred patrol vehicles fitted with cutting edge communication gadgets , ten power bikes and drones to the outfit.
“In essence, security agencies in the state now enjoy the benefit of technology surveillance from the sky”. Ita wrote.
Top Stories